Relegated Cheltenham Town would like to keep Gary Johnson as their manager next season, says chairman Paul Baker.

The Robins dropped back down to the Conference after a 16-year stay in the Football League following defeat by Shrewsbury Town on Saturday.

"We've got on very well with him, we've been impressed with him and he's my, and the board's, first choice."

The former Bristol City, Peterborough United and Yeovil Town boss, who was appointed on an initial deal until the end of the campaign, was the Robins' fourth manager this season - following Mark Yeates,Paul Buckle and Russell Milton.

"Gary and I have had a brief conversation," said Baker. "He came in just at the end of the season to try to keep us up and we said we'll sit down afterwards to talk about the future.

"He came in on a hiding to nothing, unable to do anything in the transfer market and having to work with what he had.

"Frankly, I want to get the managerial situation sorted sooner rather than later so that the fans who we hope will buy season tickets know who the manager of the football club will be - because that's the most important decision.

"He's got to consider whether he wants to manage in the Conference." 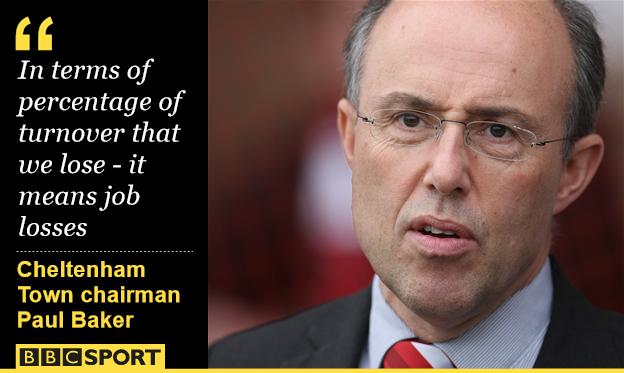 Following Yeovil's drop from the Championship 12 months ago, Johnson has suffered relegation twice in successive campaigns having enjoyed four promotions across his previous 10 seasons in management.

Cheltenham Town, who had topped the division at the start of September after four wins in their opening five games, will now return to non-league football for the first time since 1999.

"People talk about relegation from the Premier League to the Championship, but relegation out of the Football League for clubs our size is pretty significant," continued Baker.

"In terms of the percentage of our turnover that we lose - it means job losses and it means we look at our entire operation.

"But we came out of the Conference 16 years ago, we've punched above our weight, spending four years in League One, we've been to Wembley twice and the Millennium Stadium twice and we're pretty resilient.