Forest Green midfielder Rob Sinclair says he would "rather not" face brother Stuart when they play Bristol Rovers in the Conference play-offs semi-finals.

Wednesday's first leg at The New Lawn could see the brothers line up against each other for the first time, though Stuart, 27, is an injury doubt.

"Whoever wins, one of us is going to be at Wembley," said 25-year-old Rob.

"I'll be there regardless, whether I'm playing or watching my brother. But I'd much rather be playing."

The Pirates, who hammered relegated Alfreton Town 7-0 on the final day of the regular season, were pipped to the Conference title by Barnet despite losing just once in the league since Christmas. 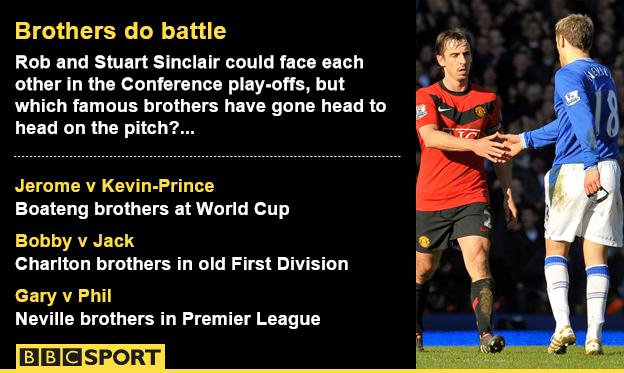 Forest Green are in the play-offs for the first time having secured the club's best-ever position of fifth.

The Sinclair brothers, who played together at Salisbury City prior to joining their current clubs last the summer, now face a two-legged semi-final for the right to play either Grimsby or Eastleigh at Wembley, with a spot in the Football League then at stake.

"I'd rather not play against him, but it'll be a massive occasion for the family and we'll see who comes out on top," Rob told BBC Points West.

"Beforehand we were hoping it wasn't going to happen - I wanted Barnet to slip up and for them to win the league. But now he wants them to win, I want us to win and that's the be all and end all."

Fellow midfielder Stuart added: "I love him to bits and when we're off the pitch we talk all the time and we're the best of friends - but when you're on the pitch you're here to win and I want to win it for the fans.

"I think mum will find it hard, but dad is quite competitive so he won't be as fussed."

Having come up through the ranks at Luton Town, Forest Green's Rob went on to play in the Football League with both Stevenage and Aldershot, while older brother Stuart dropped out of the game to have a stint as a personal trainer.

"I've always looked up to him as my older brother," said Rob. "I've never known a professional footballer with his drive and determination and me seeing him like that has given me more drive.

"Growing up, we've both always wanted to win when we're doing stuff against each other around the house.

"There's a competitiveness there and it'll be no different when it comes to these two games."