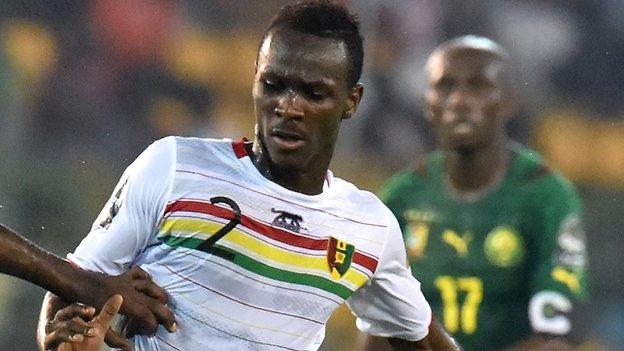 Mohamed Yattara says Guinea are aiming to maintain their 2015 Africa Cup of Nations momentum in the coming years.

The Syli Nationale reached the last eight in Equatorial Guinea through the drawing of lots at the expense of Mali but then lost 3-0 to Ghana.

"We have a lot of motivation after the last tournament," he told BBC Sport.

"I know for some people it was a surprise that we made the quarter-final and for us we want to show it wasn't a fluke,"

"We also have a young hungry squad playing without fear and eager to dominate Africa very soon.

"This squad of players with belief and confidence are as good as anybody in Africa."

The West Africans have never qualified for a World Cup but Yattara is confident they have the team capable of making history and being more successful in the next couple of years.

"We've made a significant amount of progress and the future is bright for us," he said.

"I am 21 and when you look around the squad you can only see a few older players in the mix for experience.

"It shows that given the necessary support and backing, we will be able to compete with other teams in African football.

"I am curious to say why stop in Africa and not aim for the World Cup, you have to think big in football.

"I think our new-found confidence comes from what we've experienced so far, our own ability and professional conduct."

For Yatarra, who scored against Ivory Coast in January, and his team-mates, their first task is to stay focussed on the 2017 Nations Cup qualifiers, starting in June.

Guinea are in Group L alongside lightweights Malawi, Zimbabwe, Swaziland and Yattara, who plays his club football in France for Lyon, is sure they can emerge winners from the group.

"People will expect us to qualify, like we believe we should, but that's only on paper," he added.

"We know Zimbabwe will come out fighting but Malawi and Swaziland too will want to create an upset.

"There are no small teams in African football and some teams you probably think you can beat silly will only embarrass you.

"Playing away in Africa is also tricky because of the conditions. It could be the weather or pitch that will make your life difficult."