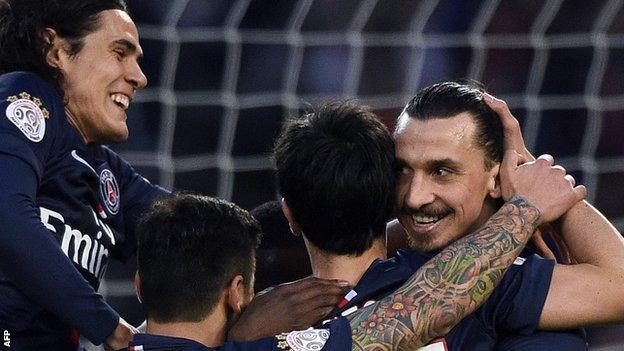 Manager Laurent Blanc, who is on course for a historic domestic treble, will also not be leaving in the summer.

PSG were knocked out of the Champions League by Barcelona at the quarter-final stage, losing 5-1 on aggregate.

But Al-Khelaifi said he was not considering making big changes.

Swedish striker Ibrahimovic, 33, has been linked with a move away from the Parc de Princes and was banned in April for three games for insulting a referee.

A number of Premier League sides are reported to be interested in signing Uruguayan striker Cavani, 28, and 25-year-old Argentine midfielder Pastore,

Speaking to Le Parisien newspaper about Ibrahimovic, who has one year left on his contract, Al-Khelaifi, said: "The matter is not even up for debate.

"He will be staying for us for next season, and that is for sure. And that goes for Javier Pastore too."

Al-Khelaifi said Cavani, who cost £55m from Napoli in 2013, was the "future of the club" and said criticism of Blanc was "unfair".