The League One title, the Football League Trophy, an FA Cup run and more than 100 goals in all competitions.

Bristol City's season reads like the CV of a Football Manager aficionado.

But, having taken over with the club 23rd in League One and in danger of suffering successive relegations, boss Steve Cotterill has transformed the fortunes of the Robins in the small space of 16 months.

In ending City's 60-year wait for a league championship, the 50-year-old also achieved that feat for the third time in his own career.

But how exactly do you build a team fit to win a title?

Find a formation that suits

Following the World Cup in Brazil, pundits, managers and supporters alike were eulogising over the return of wing-backs and the 3-5-2 system. BBC Sport's Phil Neville even described it as "fashionable", if such a phrase can be attached to a football team's formation.

However, while Manchester United manager Louis van Gaal tried and promptly ditched it, Cotterill has utilised that style of play to spectacular effect.

"We were already playing the 3-5-2 at the end of last season, so it's a formation I'd been looking at for a little while," Cotterill told BBC Sport. "But what I needed to do was make it better than the season before.

"And, while other formations can sometimes give you a problem, our formation can give other teams a problem. We've managed to do very well with it - and we've improved on it throughout the season too." 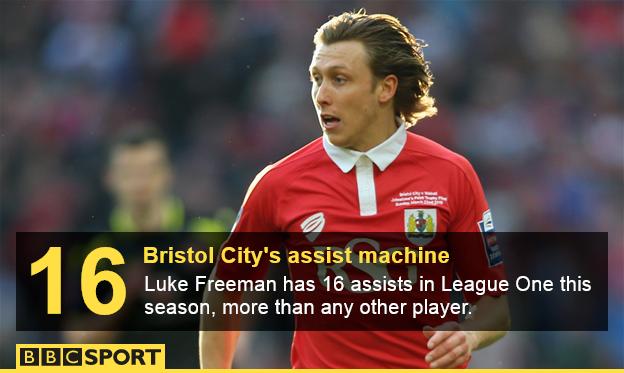 Cotterill brought in seven players during the summer, including four who were out of contract or had been released by their previous clubs.

Of those for whom the Robins paid a fee, no penny appears to have been better spent than the ones used to sign Luke Freeman.

The youngest-ever player to feature in the FA Cup proper while at Gillingham, the left-winger caught many an eye playing for Stevenage last year. He has done the same this season - but not as a left-winger.

"I always felt he could play as the one in front of a [midfield] two," said Cotterill. "You just needed to make sure he was going to work hard enough to get back and he's managed to do that.

"His running stats are up there every week and we're as delighted with that as we are his great feet in and around the final third.

"For his first season playing in that role, he's been brilliant."

Sign players who have been there and done it

The story goes that, in 1996, Manchester United's 'Class of 92' disproved Alan Hansen's theory that "you can't win anything with kids" by going on to lift the Premier League title.

What is often overlooked, of course, is that thirty-somethings Peter Schmeichel, Steve Bruce, Gary Pallister and Brian McClair all featured heavily throughout that double-winning campaign - and Cotterill has adopted a similar approach.

His two wise heads are 36-year-old captain Wade Elliott, scorer of Burnley's Championship play-off-final-winning goal in 2009, and 35-year-old forward Aaron Wilbraham, whose promotion with the Robins was the fifth of his career.

"They're really young at heart. I think if you look at the way those two look after themselves, train and their desire levels at their age, it's only good for the younger players to copy them. They've been fantastic role models."

Get goals from all over the pitch

To be successful you need a goalscorer in your team, so says the old adage. Cotterill's approach, therefore, has been to stack his Bristol City side full of them.

In total, 18 different outfield players have chipped in with goals this season, including five who have reached double figures. Though Wilbraham ended as the club's top scorer, the 12-goal contribution from centre-back Aden Flint has been as impressive as any.

"He was already fantastic in our box, but now he's become fantastic in the opposition's box too," said Cotterill. "You get a lot of centre-backs that run up for a corner, head it over the bar and the crowd say 'oooh, what a great effort', but I'm not sure that's enough.

Keep it tight at the back 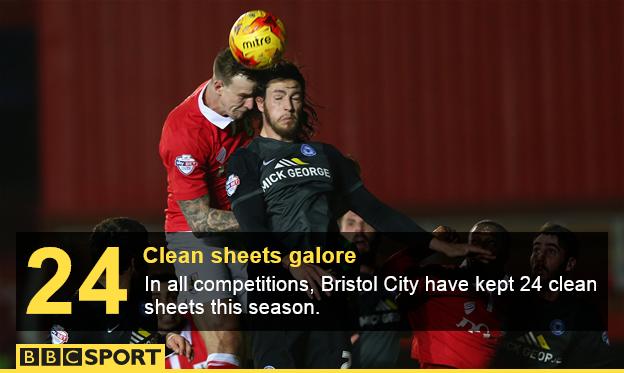 It is no good scoring bucket loads at one end if you cannot keep them out at the other.

However, boasting the best defensive record in the division, City's success also owes plenty to their solid back three.

"They've been great," said Cotterill. "When we brought Luke Ayling in, I wanted somebody that could bring the ball out and, quite often, when you look for a centre-back they might not be able to do that.

"But it was a perfect fit and Derrick Williams had done that on the other side last year. It couldn't have worked out any better."

Use the loan market wisely

No season is without its blips and, heading into the New Year, City were in danger of suffering a significant one when forwards Wilbraham and Kieran Agard both picked up injuries. Step forward Matt Smith.

Out of favour at Fulham, the former Leeds frontman signed for the Robins on loan and wasted no time in making an impression, scoring 13 times in 20 appearances, including four in a single game against Gillingham in the Johnstone's Paint Trophy.

"He's as good a loan signing as you could get," said Cotterill. "When it's new, you're wondering how he's going to score his goals - is he going to score coming into our team framework?

"But he ended up striking up a good relationship with Jay Emmanuel-Thomas and they played very well together. And, as I've said before, all good things come from Cheltenham."

Get your players to believe 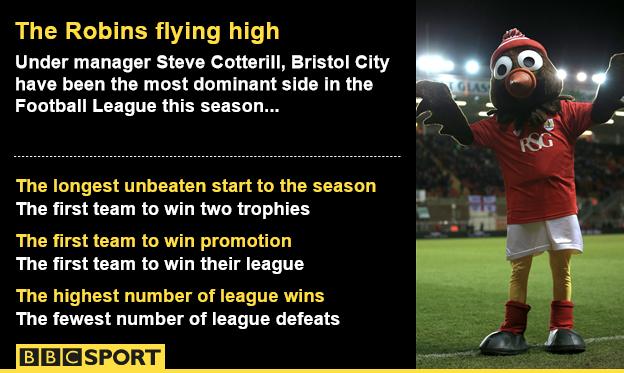 Despite having all the right ingredients in place, the most crucial can be the hardest to find. In Cotterill's words: "Belief is everything."

He added: "The players' standards and expectations throughout the season have risen. I said I wanted to win this league from day one. And I think, after a few months, their desire to win it had become the same as mine.

"You have to sell it and they have to buy it."