Mark Hughes says the current Wales squad is "better" than the sides he played in as a striker.

Chris Coleman's side are second in their Euro 2016 qualifying group, behind Belgium on goal difference.

"I think the depth is better," the former Wales boss said.

"We certainly had guys that were playing at good clubs, but weren't playing regularly.

"I think the vast majority of the squad that's putting the Welsh shirt on now are playing good games at a high level week in, week out and that's what we need.

"We'd always have good quality players, the likes of Rushy and Neville over the years. 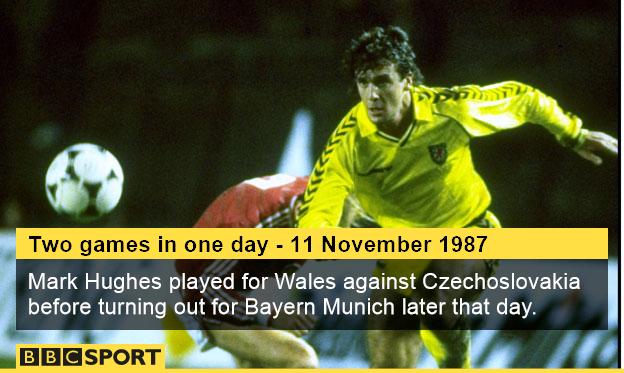 "But we'd always have to supplement that group of really strong top-level players with players that were playing at a lower level.

"No disrespect to them, but it was really hard for them to raise maybe two or three levels of what they were used to. So it was difficult.

Wales won their first four matches of their qualifying campaign for Euro 2004 under Hughes before failing to qualify after losing a play-off against Russia.

The former Manchester United striker, who won 72 caps and scored 16 times for his country between 1984 and 1999, thinks Wales can make the finals of a major tournament for the first time since 1958.

"I think what impacted on that campaign, was towards the end of the group we started getting bookings, suspensions and we had injuries as well we could ill-afford.

"Hopefully if we have a clean bill of health and everybody can get through all the games and keep away from yellow cards, red cards and we can get our strongest team on the pitch, then we've got a hell of a chance [of qualifying]."

Hughes also suffered "last-hurdle" qualifying defeats as a player for his country, but he says missing out as a manager hurt the most.

"As a manager it was really difficult to take," he said.

"It was a real opportunity and we just failed. Overall as a manager there's no compensation [with how you played].

"The overwhelming feeling is disappointment and heartache really because you've not quite done it and people who had quite an expectation and hope have been disappointed.

"So it takes a long time to get over that."