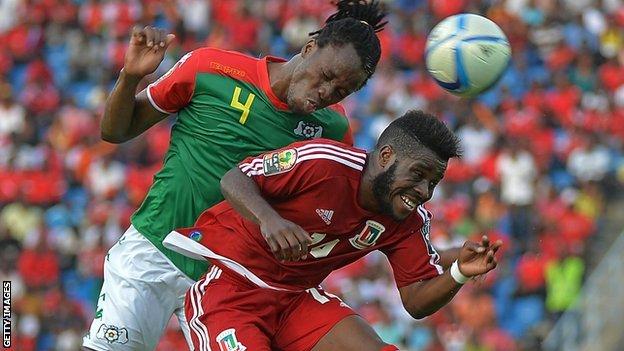 Defender Bakary Kone says Burkina Faso must resolve pay issues as well as learn to cope with pressure if they are to regain their best form.

After the Burkinabe reached the 2013 Africa Cup of Nations final, expectations were high for this year but the team exited at the group stage.

Kone told BBC Sport the team "self-destructed" because of the pressure and he also blamed a row over bonuses.

"Qualifying for 2017 starts soon, we must not repeat our mistakes," he said.

Rohr needs all the necessary support and backing to succeed

"We went as favourites in 2013 and had a good run to the final. But in 2015 when people expected so much from us we didn't play well because we pressed the self-destruct button.

"The squad arrived in Equatorial Guinea very disorganised and didn't concentrate on the football because of other problems.

"Once the federation refused to pay players the bonuses they are owed from previous games, it had a bad effect on the team at a major tournament.

"This time we need to make sure we get the build-up right."

The Burkina Faso Football Federation (FBF) is desperate to get the team back on track by ensuring qualification for their fifth successive Nations Cups appearance.

German coach Gernot Rohr has been appointed as the new coach, replacing Belgian Paul Put who departed after the 2015 tournament.

"A new coach means a fresh beginning but the last manager made significant progress until he suffered from the usual African disorganised problems," Kone added.

"Organisation is crucial and it's only when the new coach gets the right organisation in place that he will achieve success.

"He's been around Africa and knows so much about the continent but he needs to have all the necessary support, professionalism and backing to succeed.

"If these things are not in place we are going to keep running around in circle without making any progress."

The immediate task for the Stallions, who lost out to Algeria in the 2014 World Cup qualifying play-off, is to stay focused on the 2017 Nations Cup qualifiers, starting in June.

Burkina Faso are in Group D alongside Uganda, Botswana, Comoros Islands and Kone, who plays his club football in France for title-chasing Lyon, is sure they can emerge winners from the group.

"We played Comoros in a friendly game last year in Marseille and it ended in a difficult 1-1 draw," Kone said. "Countries like that can't be underrated because in African football other teams are also making big progress.

"The small countries are creating a storm lately and fighting hard to beat the so-called big teams.

"Once again it's all about getting ourselves organised to have a good qualifying campaign and keep it going. We should qualify but it will not be an easy ride to get to the finals in Gabon."