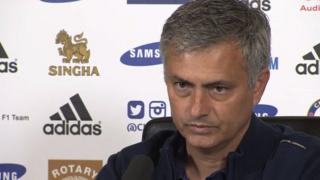 Chelsea boss Jose Mourinho says star striker Diego Costa will only play again this season if his side need him to help secure the Premier League title.

Costa, who has scored 20 goals in the league, has not featured since picking up a hamstring injury during the 2-1 win over Stoke in early April.

And, after ruling him out of Chelsea's game against Crystal Palace on Sunday, Mourinho says it is unlikely the forward will play again this season.