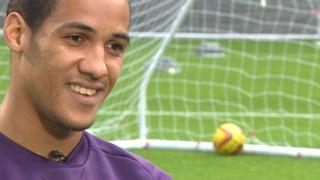 Tom Ince says his loan move to Derby County from Hull City has been the "perfect fit" but jokes that people are still more interested in his famous dad Paul's footballing pedigree.

Ince, 23, tells BBC East Midlands Today his decision to turn down the chance to play for the England-U21 side was so he could focus on getting his club career back on track and that England "flows through the blood" in the Ince family.