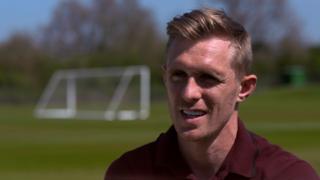 West Brom midfielder Darren Fletcher says it will be "strange" playing against Manchester United at Old Trafford on Saturday, but admits he'd like to score against his former club.

The Scottish international, who joined West Brom in February, won four league titles and a Champions League with United and also received huge support off the field during his successful battle with illness.

Watch more from Darren Fletcher on Football Focus on Saturday, 2 May at 12.10 BST on BBC One and on the BBC Sport website.