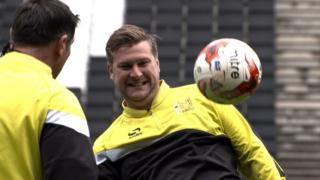 MK Dons boss Karl Robinson tells Football Focus that he and his players are ready to cap off an "extraordinary season" by winning promotion to the Championship for the first time in the club's history.

MK Dons need to get a better result than Preston in their final game to secure second position in League One and automatic promotion, both sides are already guaranteed a play-off place.

MK Dons host Yeovil on the final day Preston who have a one point advantage go to Colchester.

Watch Football Focus on BBC One at 12:10 on Saturday.