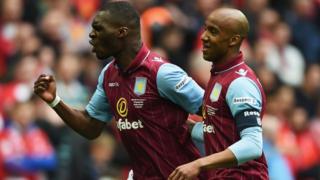 Benteke scored twice and Delph played a key role as Villa beat Everton, with Sherwood describes Benteke as "vital" to the team, and says Delph is "one of if not the best midfield player in the country at the moment".

Victory helps Villa in their bid to avoid a return to the second tier of English football for the first time since 1988.