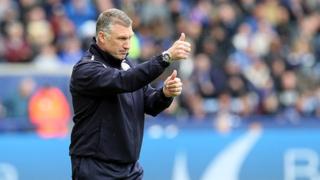 Leicester City manager Nigel Pearson says his team's commitment to the season has helped them "negotiate through some tough times" as they comfortably beat Newcastle 3-0.

A brace from Leonardo Ulloa and a rare goal from Wes Morgan sealed the win for the Foxes, while Newcastle had two players sent off.

Leicester have scored 15 goals in their last seven Premier League games, the same number they netted in the preceding 23 matches.