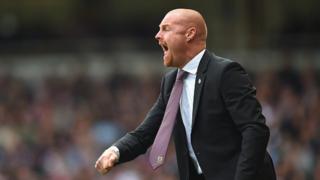 Burnley manager Sean Dyche says he was "extremely shocked" by Michael Duff's sending off and said the red card left his team with a "mountain to climb", as they were beaten 1-0 by West Ham.

Duff's first-half sending off allowed the Hammer's Mark Noble to score from the spot and give the hosts the three points, leaving Burnley's survival hopes hanging by a thread.

Burnley have failed to score in eight of their last nine Premier League matches and netted only one in the other game.