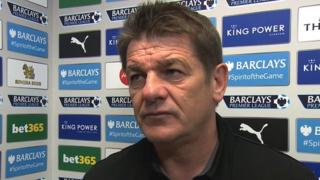 'Williamson sent off on purpose'

Newcastle head coach John Carver says he "can't accept" the lack of determination and effort from his players, and believes Mike Williamson was sent off "on purpose" following their 3-0 loss away to Leicester, something Williamson denies.

The visitors, who ended the match with nine men after the dismissals of Williamson and Daryl Janmaat, succumbed to two Leonardo Ulloa goals and a close-range Wes Morgan effort.

Newcastle have received 13 red cards since the start of last season, three more than any other Premier League team.