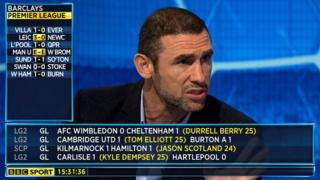 Carver out of his depth - Keown

Carver was furious with his side and in an honest post-match interview appeared to question the integrity of his players.

Speaking on Final Score, the former Arsenal defender says that Carver is "detaching himself" from Newcastle's increasingly perilous Premier League position (14th) and that he should take more responsibility in bringing the team together.