MOTD2 pundit Alan Shearer looks at the reasons why Jose Mourinho's Chelsea side won the Premier League by such a convincing margin and explains why it will be hard to stop them achieving more success.

I tipped Chelsea to win the title in August and there was not one moment during the whole season that I did not think they would end up as champions.

Every part of their team did their bit but the biggest reason for their success is one man, Jose Mourinho. His influence was huge.

The Blues manager is a serial winner who lives for titles and trophies - and he knows exactly how to get what he wants.

I don't accept the 'boring boring Chelsea' jibes his side have faced recently. I think that is utter rubbish.

It is not Chelsea's problem if teams cannot beat them, and it is pretty embarrassing if they then call them boring.

The only tag the Blues deserve is 'worthy champions' because that is what they are. Everyone else has a lot of catching up to do.

'Mourinho identified what he needed'

One of the biggest reasons Chelsea won the title is that, unlike his rivals, Mourinho identified what he needed last summer, and went out and got it.

I am sure he was hurt by what happened to Chelsea last season, his first back at Stamford Bridge since his last spell ended in 2007.

Despite not having a really top-class centre-forward they went very close to winning the title.

Near-misses don't mean anything to Mourinho, though.

He addressed the main issue holding his side back by signing Diego Costa, who has scored the goals that were missing.

Chelsea were also lacking a bit of guile in midfield, and Cesc Fabregas has provided the extra creativity there.

His midfield partnership with Nemanja Matic, who Mourinho signed in January 2014 to sit and police the back four, is just one part of a team system that works perfectly.

Chelsea have some top players, but their squad also has a great hunger and desire. That is down to their manager.

'Front-runners, almost from the start' 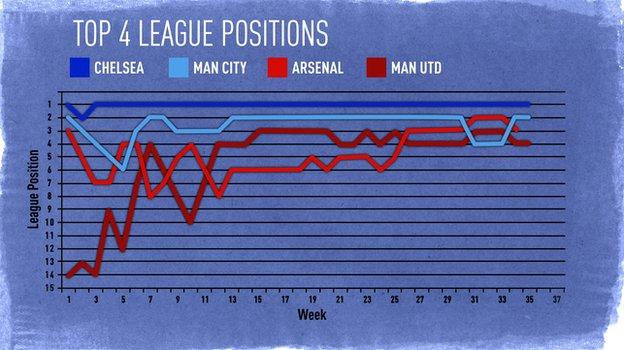 By the end of the season, Chelsea will have broken the record for the most days spent on top of the table, and also the most consecutive days.

They were joint-top with Manchester City at the start of January but, since they kicked their first ball of the campaign, the only time they have not been at the summit was after the second round of games.

Their players had the character to deal with it. From August onwards, they have been the team to beat and the best team full-stop.

That underlines their consistency over the last nine months, and shows the almost total control they have had on the title race.

Even when they were hit for five by Tottenham on New Year's Day, no panic set in.

That was one of their very few bad days, which are inevitable over a long season, but they never suffered a slump for a sustained period of time.

They have never had to play catch-up in the title race and are not used to doing it in individual games either. Again, they are usually in control.

They have scored the first goal in 27 out of their 35 league matches, which is obviously important for any team, but especially for Chelsea.

When you have a defence like they do, they are very rarely pegged back when they get in front.

'A consistent team selection too'

I keep hearing that players need to be rested and rotated but Chelsea don't do it, and their approach seems to have helped rather than hindered them.

Instead, Mourinho uses a core group of players who start whenever they are available.

That includes Eden Hazard, who is hardly ever taken off either, something that is rare for an attacking player.

At the back, John Terry has been magnificent and he has played every single minute of every league game.

The rest of the back four - Gary Cahill, Branislav Ivanovic and Cesar Azpilicueta - play whenever they are fit.

Compare them to, say, Manchester City who chop and change their defence a lot and you can see the benefit of a settled unit who work relentlessly together.

Chelsea have had 17 clean sheets out of 35 league games, and they have only conceded more than two goals twice.

They were pretty good at the back in the first half of the season when they were scoring goals freely. Until 17 January, only Southampton had conceded fewer goals.

'A season of two halves'

From August to January, Chelsea played some sparkling football and you only have to look at their attacking statistics to see that they were anything but dull.

I put that change in approach down to form and fitness of some of their players, with Costa's absence being the obvious example.

The important thing was that Chelsea kept winning, though, and they have done that.

None of their rivals have managed it over the duration of the season and the way I would sum up this campaign is that Chelsea have been brilliant and the rest of the league has not been good enough - by quite a margin.

City, Arsenal, Manchester United and Liverpool have all been disappointing, especially when you look at the money they have spent, because they are further away from Chelsea now than they have been for a while.

'More to come from this Chelsea team'

Chelsea have done the job they set out to do at the start of the season, which is to win the title.

They have the best defensive record in the Premier League and only City have scored more goals. They also have the best player, Hazard.

Put all of that together and I just cannot accept they are dull.

They have not got the credit they deserve but I don't think that bothers Mourinho one iota.

The only thing that matters to him is winning the Premier League, and he has done that with ease.

He has his third title in English football, and now he will want more.

He can get that with this Chelsea team, which certainly does not need much work done to it over the summer.

I am pretty sure a centre-forward will be high on Mourinho's shopping list because we have seen how much they have missed Costa when he has been out.

Also, Didier Drogba is 37 now and I am not sure how long he can keep going.

But the main thing for Chelsea is that Mourinho is not going anywhere - while he is around, there are more trophies to come.