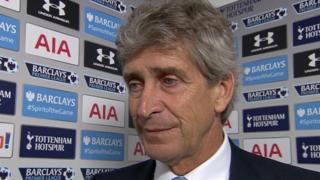 Manchester City manager Manuel Pellegrini says it was a "beautiful game" at White Hart Lane but admits his side were perhaps lucky to beat Tottenham 1-0.

Argentina striker Sergio Aguero swept home the only goal of the game in the first half, whilst Tottenham missed several chances in a gripping, open game.

The victory effectively secures Champions League football for City next season, and leaves them three points ahead of third-placed Arsenal.