Jermaine Beckford scored from the halfway line to help Preston North End beat Chesterfield and book their spot in the League One play-off final.

Leading 1-0 from the first leg, Beckford fired the Lilywhites ahead at Deepdale after Joe Garner's flick on.

A second-half penalty from Garner and a stunning long-range finish from Beckford secured their spot at Wembley.

They will face either Sheffield United or Swindon Town on Sunday, 24 May for a place in the Championship.

Preston will be hoping to end an astonishingly poor play-off record, having not won promotion in their previous nine attempts.

Before the two matches against the Spireites, the Lilywhites had only been victorious in three of their 21 play-off matches. 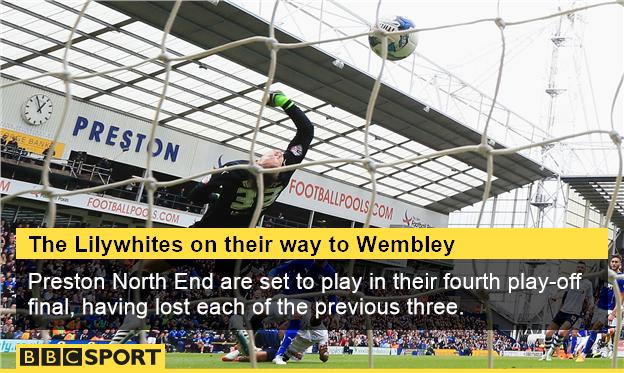 The second leg mirrored the tight affair of the first, with the tension obvious between the two teams in the niggling challenges throughout.

It took until the midway point of the first-half for Preston to test on-loan debutant goalkeeper Joe Murphy, when Paul Gallagher's long-range curler was easily gathered.

After Preston keeper Sam Johnstone brilliantly saved from Clucas, 140 seconds later, Beckford, scorer in the first leg, broke the deadlock with a smart finish as he rolled the defender.

The hosts saw little of the ball just after the break, but earned themselves a penalty when Chesterfield keeper Murphy inexplicably brought down midfielder Daniel Johnson on the edge of the area - and Garner powered home from the spot, his goal 27th of the season.

Chesterfield, who were promoted from League Two last year, created chances throughout with Ian Evatt and Sam Hird headers going close, while Jay O'Shea stuck the post late on.

On-loan Bolton striker Beckford sealed a 4-0 aggregate win when he spotted Murphy off his line and drilled the ball over him from long range.

Speaking about his second goal, Preston striker Jermaine Beckford told BBC Radio Lancashire: "I had a word with Joe Garner five minutes prior to that and he said 'the keeper comes off his line quite far, so if you get half a chance have a look and hit it as hard as you can.'

"Fortunately for me it flew in and the rest is history

"The most important thing now is we apply ourselves right in a couple of weeks' time. In the next couple of days we'll let our hair down as it's been a long, stressful season - obviously with what happened last weekend - and we'll be ready to work in a couple of days' time."

Chesterfield assistant manager Leam Richardson: "Although we were down, we never out and we kept going so it was just disappointing we didn't get anything.

"They've got Joe Garner, Jermaine Beckford as well as Callum Robinson and Kevin Davies - it's always about strikers, no matter what level it is.

"I'm sure they'll be many discussions regarding players' futures first and foremost - I'm sure we'll have conversations over the next few days."