The appointment of Terry Butcher as manager of Newport County marks the end of the most successful period since the club reformed in 1989.

That was also the year the former England captain famously played on with a blood soaked bandage on a head wound to help his country win a World Cup qualifying point against Sweden.

Nearly 26 years on Butcher will have to show that same determination to maintain the Exiles' progress in recent years under ex-boss Justin Edinburgh.

Butcher was announced as the Exiles' new manager on a two-year deal, having been out of work since being sacked as manager of Hibernian in June 2014.

He watched County's final game of the season, a 1-0 home defeat by Oxford United, which ensured them a ninth place finish in League Two.

The departure of Edinburgh to take over as manager of Gillingham in February 2015 was the decisive factor in County missing out on the play-offs. 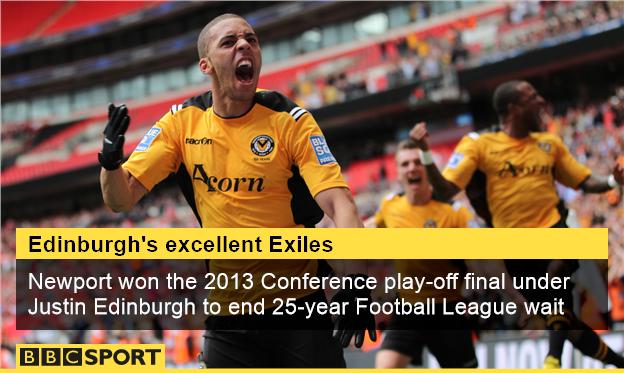 The decline in results coincided with speculation over Edinburgh's future.

But the failure to sustain a promotion push has to be put in context; Edinburgh is an immensely tough act to follow.

When he succeeded Anthony Hudson in October 2011, Edinburgh transformed a club fighting a Conference relegation battle to ensure safety in his first season.

Edinburgh led the club to an unexpected Wembley appearance, which ended in a 2-0 defeat by York City in the 2012 FA Trophy final, but masterminded a return to Wembley a year later for the most significant match in the new Newport County's history.

The 2-0 win over Welsh rivals Wrexham in the 2013 Conference play-off final ensured an end to their Football League exile and a reward for fans who had resurrected the club from the ashes a quarter of a century before.

A finishing position of 14th in their first season in League Two was a springboard for this season, which was aided by a much-improved pitch at their home of Rodney Parade.

All looked good until Edinburgh went, though his decision was understandable: Gillingham are a League One club and it is closer to his home in Essex.

His assistant Jimmy Dack was put in charge to stabilise the club and said he actually turned down the offer of the manager's job.

Dack had held the fort in difficult circumstances, before bowing out against Oxford on a day of high emotion for him and amid a deserved ovation.

He coped with the turmoil of the departure of the man who had signed most of the players, a decline in form and the jailing of striker Chris Zebroski for four years and four months for two attacks.

Dack believes Butcher needs only to ''tweak'' the squad at County.

Results suggest the current squad does not lack drive or commitment. County have beaten six of the top seven sides, including wins away at promoted pair Burton and Bury.

There is a clear need for more guile and creativity in the midfield and, as Dack says, a greater cutting edge up front.

County have relied too much on Aaron O'Connor, whose 11 goals this season make him a target for other ambitious clubs in the lower divisions.

With plenty of player contracts up for renewal, Butcher will at least have close to a clean sheet from which to start as he looks to beef up the squad.

Keeping young player of the year, Regan Poole, will be a prority. The 16-year-old defender has made 12 league appearances and has shown a composure and poise beyond his years.

He almost moved to Fulham in the January transfer window, while Manchester United have also shown an interest.

But Wales Under-17 international Poole has already shown the benefit of playing in the Football League and could develop further next season if he remains at Newport.

Goalkeeper Joe Day and full-back Ryan Jackson have also caught the eye, while County's defensive organisation under Darren Jones has been good.

But these are decisions for Butcher, whose player dealings will be governed by club finances under chairman and benefactor Les Scadding, the EuroMillions lottery winner.

Scadding has made it clear he does not want to bankroll the club in the long term so County can become self-sustainable, and it seems there will be a reduction in the budget.

But Butcher goes into this with his eyes open, having monitored County's games in the last few weeks.

He is also set to appoint his former Ipswich and England defensive team-mate Russell Osman as his assistant.

Butcher has managed in England, Scotland and Australia with a mixed record.

County fans will be hoping he can bring the success he engineered at Inverness Caledonian Thistle, who he steered to the Scottish First Division title.

Former County captain and coach Jason Perry believes the appointment of Butcher will ''excite'' the club's fans and his knowledge of the Scottish player market could be valuable.

The 56-year-old is undoubtedly joining a leaner County and because of his standing in the British game his fortunes will be closely scrutinised.

But as he rightly pointed out, it is rare for a manager to walk into a position with a club upwardly mobile.

Now the 77-times capped England stalwart, who is in the Scottish Football Hall of Fame after captaining Rangers to three league titles, will be hoping to thrive in Wales at a club looking to build on an unforgettable few years.