All three players were out of contract at the Championship club.

Cardiff City are trying to arrange a testimonial game for McNaughton who joined the club from Aberdeen in 2006.

Manager Russell Slade said: ''He [McNaughton] seemed a great lad, he's been a great servant to the club and that was reflected in the letter he had from the club yesterday."

Slade, who admits he has a busy summer ahead of him following a turbulent season in which he replaced Ole Gunnar Solskjaer, is meeting the squad this week.

Third-choice goalkeeper Ben Wilson has signed a new deal with the club which expires in 2017. 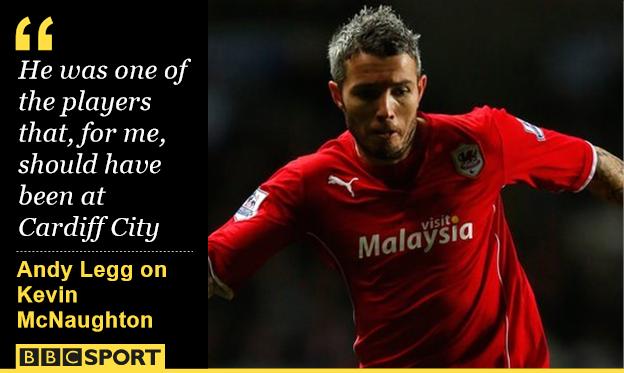 Cardiff finished the season in 11th place in the Championship after a 2-1 win at Nottingham Forest.

A statement on the Cardiff City website read: "All of us at Cardiff City would like to express our sincere thanks and respect to Kevin for his immense contribution to our football club.

"We'd like to wish Kevin, Danny and Nicky the very best of luck for their futures, adding additional thanks and gratitude to Danny for his two playing spells with the Bluebirds and his short caretaker-managerial stint in conjunction with Scott Young, prior to the appointment of Russell Slade."

McNaughton made 282 appearances for Cardiff, but spent most of the 2014-15 season on loan at Bolton.

The Scottish international joined the Bluebirds in 2006 from Aberdeen and played for City in the 2008 FA Cup final, 2010 Championship play-off final and 2012 League Cup final.

He was also a mainstay of the side that clinched the 2013 Championship title.

McNaughton's last appearance in a Cardiff shirt came in the 1-0 win over Southampton in the Premier League in April 2014.

Former Wales international Gabbidon returned to the club at the start of the season as player-coach under former manager Solskjaer.

Gabbidon, 35, who made two appearances during the campaign, wants to continue playing and has been linked with a move to the United States.

Maynard has been dogged by injuries since his arrival from West Ham but did feature towards the end of this season.

Macauley Southam, Jazzi Barnum-Bobb, Tyler Roche, David Tutonda and Curtis Watkins have all been offered an option to remain at the club for 2015/16.