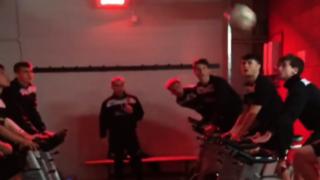 Motherwell players celebrate wildly after an elaborate game of head tennis ends in them successfully heading a ball into a cardboard box.

That prompted the Football Focus team to attempt to recreate the feat before Saturday's show.