The two clubs will meet in the first leg of their League One play-off semi-final at Bramall Lane on Thursday.

"The pressure on them is the expectancy," Cooper told BBC Wiltshire.

"Because it's such a big club they're expected to get promotion, whereas we're not. They've shown before they can deal with that, but let's hope they don't."

Cooper added: "The only pressure on us is from within, which is the pressure we put on ourselves to put on a good performance and show everybody what we're all about."

Both sides head into their two-legged showdown in poor form, without a victory in any of their final five regular season matches.

Cooper has elected to rotate his squad in an attempt to keep them fresh for the play-offs, using 27 different players across those last five games. 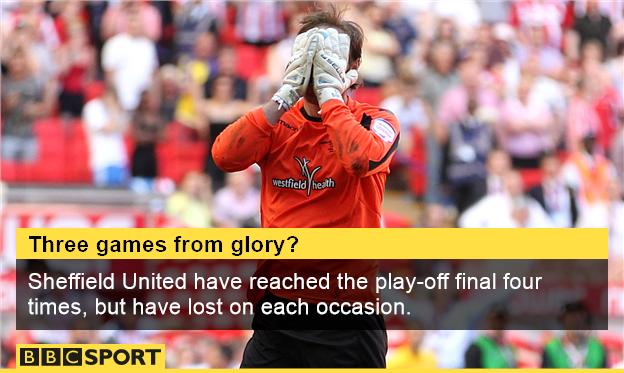 "We've done it with the right intentions, to make sure everyone is refreshed and ready to go," he said.

"I'm excited. Bramall Lane is one of those old-fashioned stadiums with a fantastic atmosphere and I'm really looking forward to it.

"It will be nerve-wracking and anxious, but it is what it is. We'd rather be here than sat on the beach now and eating our ice creams."

Sheffield United boss Nigel Clough has admitted he is unsure what to expect from the Robins.

Clough, who guided the Blades to fifth in the table, has only been involved in the play-offs once before.

"I'm not sure how they will approach it. I don't see them changing from how they've been all season which is attacking and adventurous," he told BBC Radio Sheffield.

"You never know how it is going to pan out. You can plan things but then something can happen in the first five minutes that changes everything. We have to be ready to adapt."