Forward Jay Emmanuel-Thomas will leave Bristol City in the summer, the League One champions have announced.

The 24-year-old scored 12 goals in 48 appearances this season, but will not be given a new contract.

Goalkeeper Dave Richards has also been released, but midfielder Marlon Pack, 24, is to be offered a new deal.

Meanwhile, 36-year-old captain Wade Elliott has been offered the job of under-21 manager after being told his playing contract will not be renewed.

The former Burnley and Birmingham midfielder signed a one-year deal last June, but has not started since the 3-2 defeat at Colchester in February.

"He's fit enough to carry on playing, which is his dilemma," manager Steve Cotterill told the club's website. "For me, due to where we may need to strengthen, I've offered Wadey a coaching job.

"He would be an excellent addition to my staff, as someone who knows me. He's got all the credentials to be a good, young coach.

"There is no time frame. He will have other offers to carry on playing. I don't want to finish his career prematurely if he still wants to play."

Pack, who replaced Elliott for Bristol City's run-in, signed for the Robins in 2013 and has featured 99 times, scoring his third goal for the club in Sunday's 8-2 win over Walsall.

"I'm sure through his agent that it will get sorted out," said Cotterill. 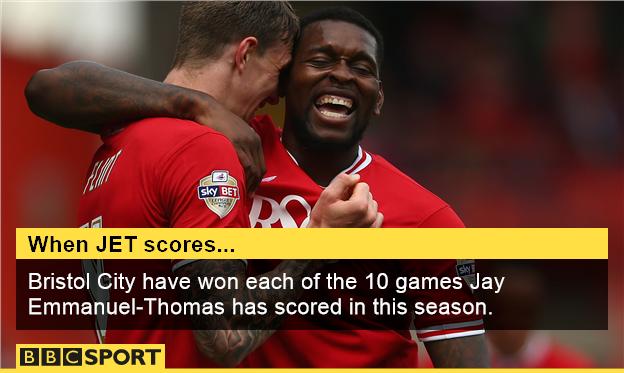 "His demeanour around the place when he wasn't in the team was second to none. Even when he got in the team, even though it kept Wadey out, I think Wadey was pleased for Marlon."

Former Arsenal youth product Emmanuel-Thomas has also been with City since 2013, scoring 33 goals in 103 games across the last two campaigns.

However, Cotterill has favoured a strike pairing of Kieran Agard and Aaron Wilbraham this season and said Emmanuel-Thomas needs "regular football".

He added: "It was very sad really, I've been a big supporter for Jay. When people look at him and see his laid-back style and then suggest he doesn't care - it's the total opposite.

"I know there are potentially a few people interested in him. I've spoken to people about him in the last few weeks and I've told them what a wonderful character he is."