Demonised and ridiculed yet praised for their business brains and financial foresight, the Glazer family have split opinion during their 10-year reign as owners of Manchester United.

From trophies to transfers, debts to sponsorship deals, players to profits, BBC Sport examines the impact on different aspects of the club, a decade after the Americans' controversial takeover.

Already the most successful club of the Premier League era, United have won more silverware in the decade since the Glazer takeover than the 10 years before.

They have also claimed more trophies in the past decade than any other English club. 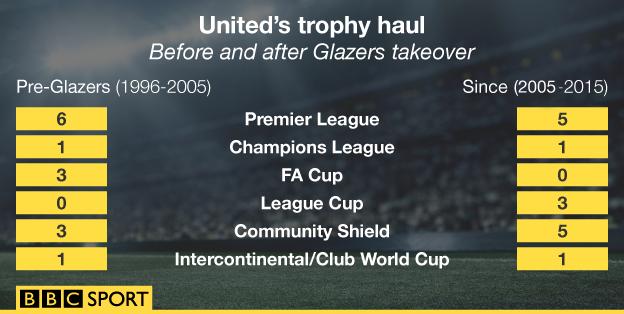 Only Chelsea come close, with 13 trophies compared to United's 15. Manchester City are next with five.

While domestically the past decade has brought regular success until the last two years, United still lag behind major European rivals.

Spanish aristocrats Barcelona have won 19 trophies in the same period, including three Champions League titles in 2006, 2009 and 2011. German giants Bayern Munich have lifted 17.

Opposition to the Glazer ownership has centred around United's relative lack of spending in the transfer market.

Until David Moyes broke the club record by spending £37.1m to sign Juan Mata from Chelsea in January, net spending had only once exceeded £50m since 2005.

Some supporters remain adamant Sir Alex Ferguson's spending was restricted under the Glazers, despite the Scot's repeated denials.

"At not one point in the Glazers' ownership has a manager said, 'I want this player, can you pony up the money for it' and they have said no," said a source. "It still astonishes me that even Sir Alex saying it multiple times was not believed."

That stance is reinforced by Tehsin Nayani, who spent six years as the Glazers' official spokesman.

"There was never any financial barrier to Sir Alex Ferguson," said Nayani.

United had been debt-free until 2005. That all changed when the Glazers took over.

Many fans argued they were effectively gaining control with the club's own cash. That belief prompted waves of protests, which continue in some form today.

Even the club's own directors went public with their dismay at the time of the £790m takeover bid, claiming it was "too aggressive" and "potentially damaging". 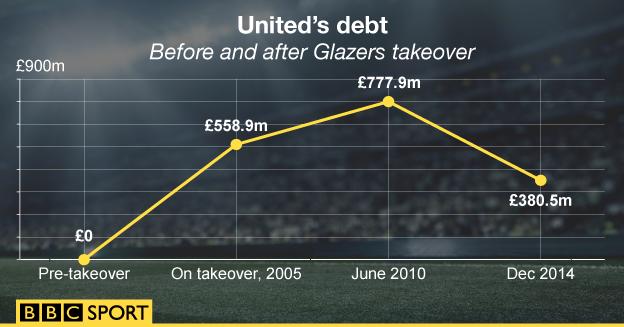 Rather than putting the Glazers off, the move hardened attitudes within the camp.

Even the view of business experts Deloitte and Touche, who were brought in to do an industry report on the club and argued the deal did not make financial sense, did not put them off.

"In the end, the Glazers beat their numbers," said a source close to the deal. "Deloitte weren't just wrong, they were miles wrong."

Following the takeover, ticket prices initially rose sharply. A season ticket in the East Stand Upper Tier at Old Trafford increased by almost 30% from £494 to £665 between 2006 and 2009. This season it was £705.

A £500m bond issue was launched in January 2010, which created more supporter anxiety due to a clear warning spelt out in the prospectus about the financial structure of the club - "our significant indebtedness could adversely affect our financial health" - which included the potential sale and lease-back of United's Carrington training complex.

Reaction came in the form of a visual green and gold protest. Even David Beckham ended up wearing a scarf in the colours United had first worn when founded as Newton Heath in 1878.

On 1 July 2005, they flew into England for a momentous visit, including a first visit to Old Trafford and a first - and so far only - interview by co-chairman Joel Glazer with MUTV, the club's official television channel.

The visit ended with the brothers being driven out of Old Trafford in a police van for their own safety due to the angry protests outside.

Earlier in the day, they had paid a visit to Newbury, UK base of Vodafone. It was expected they would provide some reassurance to a company paying £9m a year to have their name across United's red shirts.

"They did nothing of the sort," said one source who is familiar with the conversations that took place. "No-one could quite believe it because there was a feeling Vodafone wanted out anyway. But afterwards, the brothers were completely calm. They felt £9m a year totally undervalued what the shirt deal for Manchester United was worth."

Their replacements, US insurers AIG, paid £14m a year. When they could not renew, Aon agreed an £80m deal over four years.

Car giant Chevrolet are now in the first season of a seven-year deal worth £361m. Aon's association remains through a £120m eight-year deal to sponsor United's training ground and kit.

After inheriting a commercial department of two, the Glazer family sanctioned an increase in staff to more than 150.

In comparison, Adidas are paying Chelsea £300m over 10 years. Chelsea will also receive £40m a year from Yokohama Rubber to sponsor their kits from next season.

When United reported their 2013-14 financial accounts, commercial revenue of £189.3m exceeded the entire turnover - match-day revenue, media income and commercial combined - of all but four of their Premier League rivals.

It allowed them to sack Moyes and his staff at a cost of £5.2m, ride the loss of £50m through the failure to qualify for this season's Champions League and still sanction the purchase of Memphis Depay from PSV Eindhoven for a fee of between £25m and £30m, with manager Louis van Gaal looking to make further additions to his squad this summer.

Global appeal - out on their own

The United States has been identified as the major commercial market of the future given the growing interest in the Premier League, thanks in part to extensive coverage by network broadcaster NBC

United have negotiated deals in over 150 countries, many of them regionalised.

"Other clubs are taking a leaf out of our book," said a United staff member who preferred not to be identified.

"But copying how you do it is one thing. They are not the same as Manchester United."

An earlier survey by German company Sport+Markt put United's fanbase at 354 million in 2011, ahead of Chelsea (135 million), with Arsenal (113 million), Liverpool (71 million) and Manchester City (18 million).

Someone now detached from the club described the family as "one of the best owners" in football, with the exception of maybe Sheikh Mansour at Manchester City.

"They are low-profile and have kept out of the way to let the manager do his job," said the source.

"There is a lot of cynicism around them, but they had a simple strategy - and it has worked."

Ferguson stated his preference for the straightforward ownership model the Glazers brought after the difficulties he had endured dealing with the publicly-owned 'PLC'.

They have presented the impression of being owners prepared to stay in the background and let the manager do his job, even if it could be argued Ferguson was unsackable and Moyes's 51-game tenure was the shortest reign of any United manager since World War Two.

Five of Chelsea's recent managers did not last that long, including Roberto Di Matteo, who won the Champions League.

"I firmly believe that takeover was bad news for the football club - and still is," says Andy Walsh, general manager of FC United, the club set up in 2005 by disaffected United fans in protest at the Glazer family's debt-burdening ownership of United.

"Yes, there has been success on the field. But Manchester United has been reduced by the Glazers's involvement.

"It has caused disruption amongst the support and the whole attitude of the club has changed in the approach they make to the game and their commitment to Manchester.

"The values Manchester United was built on, through the 1930s, 40s and 50s, have been eroded for profit, the personal profit of the Glazer family."

The protests may have been largely silenced but public portrayal of the Glazers remains overwhelmingly negative.

But a source familiar with them said: "They are human beings. If you were to ask someone would they rather be liked or not liked, the answer is obvious.

"The state of their relationship with the fans is not a surprise. It is very difficult to turn opinion round on a group of people who are fundamentally private individuals and do not engage directly. But it is wrong."