Swansea City have come a long way since 2005.

That year they won promotion from League Two, and in the intervening decade have climbed to the top 10 in the Premier League.

This season the Swans became the first Welsh club to make it into the top 30 highest-earning teams in the world.

Yet on 11 May, 2005, they were celebrating promotion with the team playing its last game at the Vetch Field - a decrepit old stadium in the shadow of Swansea prison.

It was a night to remember.

The Vetch now and then

A white wall painted with a black swan and a gate which has the signs 'East Stand' and 'Wing Stand' above it are some of the few reminders of the Vetch still to be seen nowadays, a decade after fans flocked there for the last match at the club's home since its formation in 1912.

That game was the FAW Premier Cup Final against Wrexham, and it was a memorable experience standing on the North Bank terrace among thousands of home supporters who were understandably in high spirits.

Four days earlier the Swans had gained promotion from League 2 with a 1-0 win at Bury after an early goal from Adrian Forbes and the previous Saturday - 30 April - Kenny Jackett's side had won their last League match at The Vetch.

That was also a 1-0 victory over Shrewsbury after Forbes scored against the current England and Manchester City goalkeeper Joe Hart.

Before the match there was a parade of former players around the pitch and Max Boyce led the 11,000 crowd in the singing of the Welsh national anthem "Hen Wlad Fy Nhadau". 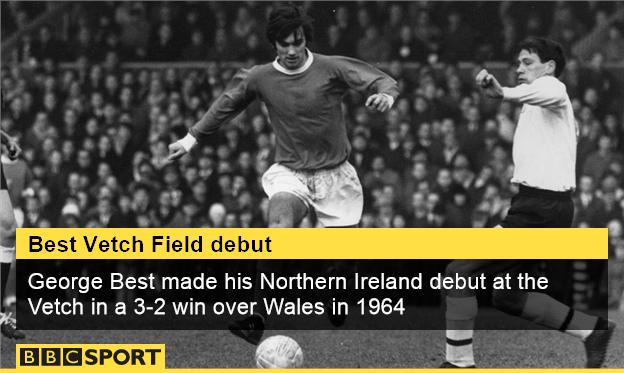 There was an attendance of 9,000 for the game against Wrexham. The visitors had just been relegated from League 1 and they threatened to spoil the party.

Juan Ugarte gave them the lead with half an hour to go but Swansea came back to win 2-1 with an own goal from Shaun Pejic and a winner from Andy Robinson.

And while Swansea went from strength to strength in the next few years, securing promotion to the Championship in 2008, in the same year Wrexham were relegated from the League to the Conference, where they remain today.

A rush for souvenirs

Straight after the final whistle in the 'swansong' at the Vetch thousands rushed from the famous North Bank.

Some sprinted on to the pitch to rip chunks of grass off the playing surface and others across the pitch to get their hands on a seat as a souvenir - which is precisely what one of my son's friends did.

One of the most bizarre sights outside the ground a little later was two lads trying to carry one of the advertising boards that had been at the side of the pitch - it was long and it was evidently heavy because of the problems they were having attempting to move it.

It was a strange feeling leaving the ground knowing that there would be no return to commentate for BBC Radio Cymru.

Covering matches there had always been an adventure involving a climb up the rusty ladder to the BBC commentary gantry above the North Bank.

The unnerving shaking of the gantry as the fans celebrated a goal or a win always added to the excitement!

A fabulous future no-one could have predicted

The club would be moving home to the brand new stadium - unnamed at the time - in the Morfa area in a few months.

The Liberty Stadium opened in July 2005 and since then Swansea - under the chairmanship of Huw Jenkins - have progressed up the English football pyramid and secured promotion to the Premier League in 2011.

Garry Monk, who played in the last league game at the Vetch, is now the club's manager and has guided the Swansea to their highest ever points total in the Premier League.

If anyone had suggested on 11 May 2005 that 10 years on Swansea would be facing Arsenal in the Swans' fourth successive season in the Premier League they would have been accused of talking nonsense…..