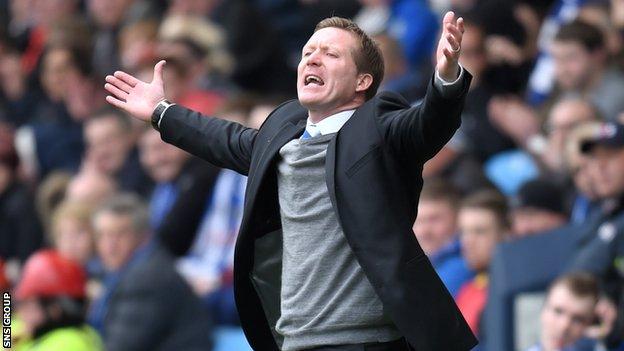 Manager Gary Locke wants Kilmarnock to secure their Premiership status on Friday to avoid the prospect of back-to-back relegations.

Locke was at the helm when administration-hit Hearts dropped into the Championship last season.

A win at Motherwell will prolong Killie's 22-year stay in the top flight but defeat would leave them three points above the play-off spot.

"We know if we get a result tomorrow, we will be okay," said Locke.

The 39-year-old started the season as assistant manager at Rugby Park but was given a three-year contract in April following Allan Johnstone departure.

The deal was signed after a run of one defeat in seven matches as interim boss.

However, last Saturday's 3-2 loss at home to Hamilton was a sixth defeat on the trot for the Ayrshire side.

"The relegation with Hearts last year is different to the situation facing us here because there was a lot of circumstances that contributed to us going down," explained Locke.

"But even so, you don't want that on your CV at any time.

"And you definitely don't want two relegations back-to-back on there either.

"We are working ever so hard to try and turn it around. If you go back four or five weeks we showed what we are capable of.

"We're more than capable of doing that again and it's important the boys believe in themselves."

Having spent much of the campaign comfortably in mid-table aiming for a top-six slot, Locke's team are now scrambling for points to stay above 11th-placed Motherwell in the final three fixtures of the league campaign.

It is a similar situation to the one Hibernian faced last year.

Hibs were seventh on New Year's Day but won just one of their last 19 games as they slid down the table before losing out via the play-offs.

"We don't want what happened to Hibs to happen to us here," added Locke. "We are working hard to make sure we are not branded with the same brush as Hibs were.

"What happened to them could happen to us. There is no doubt about it.

"But I'd still rather be in our position than Motherwell's. We know what we have to do so it's important we get that win tomorrow.

"At the end of the day we've not got time to feel sorry for ourselves."