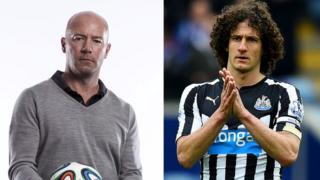 Newcastle legend Alan Shearer says he is surprised that captain Fabricio Coloccini chose to write to the fans and ask them to stick with the club.

Shearer believes the support of the fans at St James' Park is "guaranteed" and the team now have to try and "scrape three points" to ensure they stay in the Premier League.

Yesterday, current boss John Carver said he is "the best coach in the Premier League", despite the Magpies having taken nine points from a possible 48 since he took charge.

You can see the full interview with Alan Shearer on Football Focus, Saturday 12:10 GMT on BBC One.