Former St Mirren midfielder Ricky Gillies believes uncertainty over the future of the club has contributed to their relegation from the Premiership.

Motherwell's win 3-1 at home to Kilmarnock on Friday consigned the Buddies to the Championship next term.

"There's a lot of instability within the club," Gillies told BBC Scotland.

"The club has been up for sale [for several years], and that's something I thought would have been sorted out last summer."

The future of manager Gary Teale is another issue that is still be decided at the club.

"They need to find some stability off the pitch and that can only help the lads on the pitch," Gillies said. 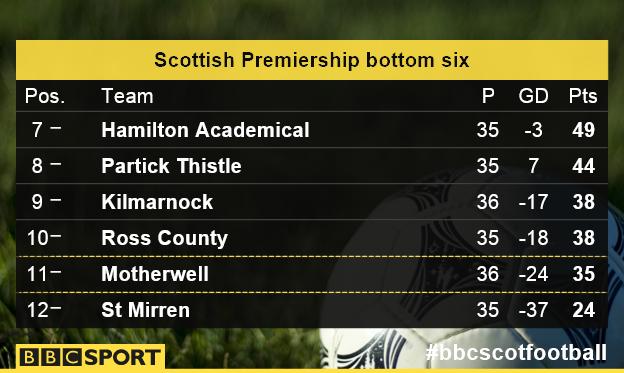 "I hope they do give it to Gary but I believe he needs some experience as his assistant manager, somebody like Billy Stark with all that experience alongside Gary Teale would be a good balance."

St Mirren started the season with Tommy Craig in charge but the experienced coach was sacked in December, seven months after stepping from his role as assistant to Danny Lennon, who left at the end of season 2013-14.

It took the Paisley side until September to win their first points of the season and their failure to win a home league game until February was another factor in their eventual demotion.

And Gillies, who had two spells and played over 300 games with St Mirren, believes combining experience with the club's younger players can help them to return to the top flight.

"This [relegation] could be a positive for St Mirren in terms of getting themselves back and getting the young lads in the team and surrounding them with experience," he added.

"Stevie Mallan and Jack Baird are good young players who are coming through so hopefully [it can be] very similar to what Hearts did. They got a lot of experience [after relegation] and it really carried those lads in the Championship.

"But it will be difficult for St Mirren to push for promotion next season, with the club not having the biggest budget they need to have a real team spirit and come back fighting and I hope they come back next season."