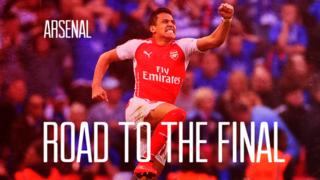 As Arsenal prepare to face Aston Villa in the FA Cup final at Wembley on Saturday, BBC Sport looks back at the Gunners' route to the final.

Starting with a repeat of last season's final victory against Hull, Arsenal saw off Brighton, Middlesbrough and Manchester United before their extra-time semi-final victory over Reading.

Follow all the action from the FA Cup final between Arsenal and Aston Villa live on the BBC.