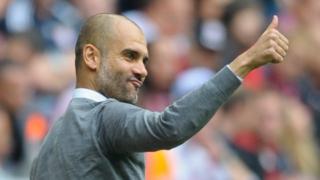 Is Guardiola heading to Man City?

The former Barcelona manager, 44, is rumoured to have agreed a deal with City to replace Manuel Pellegrini, although the club have dismissed the speculation as nonsense.

Amy Lawrence says the Spaniard always does things "on his own terms" while John Murray says recent comments from Jose Mourinho may indicate the Chelsea boss has heard that Guardiola is coming to the Premier League.

Who has won the English top-flight title?