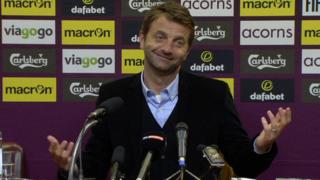 'Sign for us or miss the FA Cup final'

Aston Villa manager Tim Sherwood jokes that on-loan Tom Cleverley will not play in the FA Cup final against Arsenal, unless he signs for Aston Villa permanently.

The central midfielder scored the only goal in a crucial 1-0 win against West Ham - and Sherwood wants him to commit his long-term future to the club.

Villa will sit down with Cleverley over the prospect of a move from Manchester United soon, and Sherwood also believes he could force a way back into the England reckoning.