Barca levelled when Luis Suarez squared for a tap-in from Neymar, who drilled in after the pair combined again.

Robert Lewandowski and Thomas Muller both curled in as Bayern won on the night, but Barca still progressed.

And the Spanish club's success means the tantalising prospect of an 'El Clasico' showpiece against Real Madrid in the 6 June final in Berlin remains alive.

Their La Liga rivals must overturn a 2-1 first-leg deficit against Italian champions Juventus on Wednesday for the opportunity to defend their European crown against Barca.

Few outsiders had given German title-winners Bayern any chance of overturning the visitors' advantage after a clinical victory at the Nou Camp last Wednesday.

And ultimately they were proved right as the Spanish league leaders comfortably maintained their ambitions of a La Liga, Champions League and Copa del Rey treble.

But Bayern were left wondering what might have been after wasting several chances and failing to keep out Barca's potent attack with some hazardous defending.

Guardiola's side had made the perfect start through Benatia's first Champions League goal. The defender was allowed a free header to nod into the bottom left corner from 15 yards.

But the optimism that swept across the vast majority of the Allianz Arena lasted less than eight minutes.

Guardiola, in charge of Barcelona between 2008 and 2012, insisted his team would attack sensibly and patiently as they aimed to become only the second team to overturn a three-goal first-leg deficit in a Champions League knockout tie. 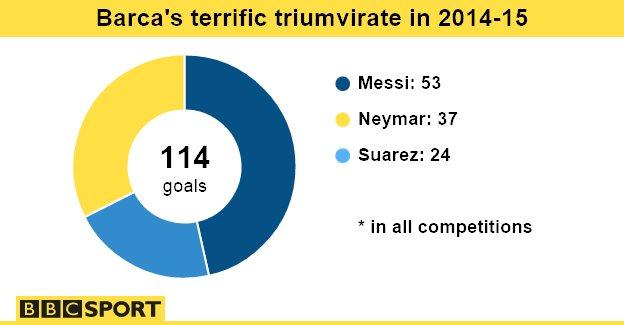 However, Bayern were guilty of naive defending as their early lead on the night was wiped out.

Lionel Messi's perfectly weighted pass allowed Suarez to run beyond the home defence, before the Uruguayan unselfishly squared for team-mate Neymar to roll in.

Bayern, still encouraged by their vocal fans, continued on the front foot and created several chances, squandered most notably by Muller and Lewandowski.

But the tactic left them vulnerable - and the Bundesliga champions were punished again on the half-hour mark.

The home side were short of numbers defensively as Suarez and Neymar sprung forward, with the former Liverpool striker again teeing up his team-mate who had time and space to chest down and drill into the near corner.

That goal effectively killed off the tie, leaving Bayern needing to become the first team since 1994 to score six times against Barca.

Barca, who need one win from their final two matches to regain the Spanish title, removed Suarez at the break after the striker complained of a tight hamstring and offered little attacking threat in the second half as Bayern fought back.

Lewandowski showed neat footwork to create space and precisely finish, before Muller guided into the same bottom corner from 20 yards.

But it was too little too late as Barcelona moved within one victory of their fifth European crown.