Manchester City are willing to make Paul Pogba the highest-paid midfielder in the world and are preparing a British record £70m bid for the 22-year-old Juventus player. (Daily Star)

Midfielder Tom Cleverley has hinted he wants to stay at Aston Villa. The 25-year-old is currently on loan from Manchester United. (Daily Express)

West Brom will try to hijack Scott Sinclair's move to Aston Villa with their own £2.5m summer bid. The 26-year-old winger is expected to leave Manchester City in the summer. (Daily Mirror)

Liverpool have stepped up their interest in Borussia Dortmund forward Pierre-Emerick Aubameyang. The 25-year-old Gabon international would cost £15m. (Shoot.co.uk)

Swansea City keeper Lukasz Fabianski, 30, is enjoying his new home in south Wales - even the traffic jams caused by cows.(Guardian)

Striker Papiss Cisse, 29, believes he can score the goals to help keep Newcastle United in the Premier League. (Shields Gazette)

Real Madrid midfielder Toni Kroos, 25, will be available for Wednesday's Champions League semi-final against Juventus, despite suffering an injury in Saturday's draw with Valencia. (AS.com, in Spanish)

Swansea City can take a step towards a surprise top-six place if they can upset Arsenal on Monday, according to captain Ashley Williams, 30. (Wales Online)

Tottenham striker Harry Kane, 21, says the team must stop making "sloppy" mistakes if they are to achieve anything this season. (Daily Mirror)

And Wenger says that Arsenal defender Calum Chambers, 20, could have suffered a career setback by becoming an England international while so young. (The Sun - subscription required)

Manuel Pellegrini says he is unaware of reports that he is soon to be replaced as manager by Bayern Munich boss Pep Guardiola. (Four Four Two)

Bayern Munich forward Thomas Muller, 25, has fuelled rumours that he will join Manchester United by saying he has a good relationship with Red Devils manager Louis van Gaal. (Metro)

Real Madrid's German midfielder Sami Khedira, 28, could also be a target for Manchester United and Arsenal, but is most likely on his way to Schalke.(Goal)

Liverpool are in the running to sign Barcelona full-back Martin Montoya, 24, according to Spanish reports. (Sport Witness)

QPR boss Chris Ramsey agreed with his captain, Joey Barton, that the club have some "bad eggs". (Guardian)

Manager Jose Mourinho says midfielder Ruben Loftus-Cheek will have a career at Chelsea after the 19-year-old made his first start against Liverpool. (Goal,com)

Inter Milan manager Roberto Mancini refused to deny reports goalkeeper Samir Handanovic could leave the club in the summer, with Manchester United and Juventus reported to be interested in the 30-year-old.(Gazzetta dello Sport, in Italian)

Chelsea captain John Terry is off on holiday, it seems. The defender posted on Instagram: "Few days in the sun. Well deserved rest with @toni26terry."

Former Chelsea goalkeeper Carlo Cudicini was at Stamford Bridge on Sunday as a guest for the match against Liverpool. The Italian 41-year-old caught up with old team-mates Didier Drogba and Petr Cech, and tweeted: "It was great to see @Capitancarloc at the Bridge today."

Crystal Palace defender Peter Ramage, who spent four years with QPR, reacted to his former team's relegation on Sunday. Ramage tweeted: "Disappointed for the QPR today, horrible feeling, but they've bounced back before and sure they can do it again!" 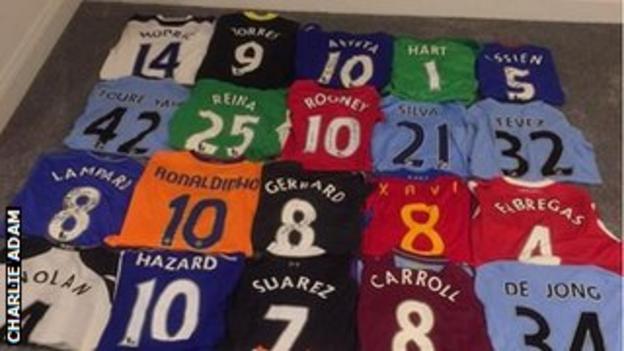 Stoke City midfielder Charlie Adam is ready to put a few memories on the wall. He tweeted: "Some of my tops I have collected over the years ready to be framed."

Sunderland boss Dick Advocaat says he would have to get a divorce if he was stay on at the club next season. (Independent)

A match steward made a last-ditch tackle to prevent an angry fan from confronting the referee during a Mexican league match between Santos and Puebla.(Metro)