Dave King is free to take up the chairman's role after being passed "fit and proper" by the Scottish Football Association.

King, who owns 14.5% of Rangers' shares, led a successful bid to oust the previous board at Ibrox in March.

However, the governing body needed time to assess King's suitability, given his tax convictions in South Africa.

The fact he sat on the Rangers board prior to administration and liquidation was taken into consideration.

Acting chairman Paul Murray, who was also on the board prior to administration, had his position as a director ratified by the SFA on 1 May.

BBC Scotland has learned that the SFA consulted the relevant authorities in South Africa and Scotland, including the police, the South Africa Revenue Service and Her Majesty's Revenue and Customs, before allowing King to become chairman. 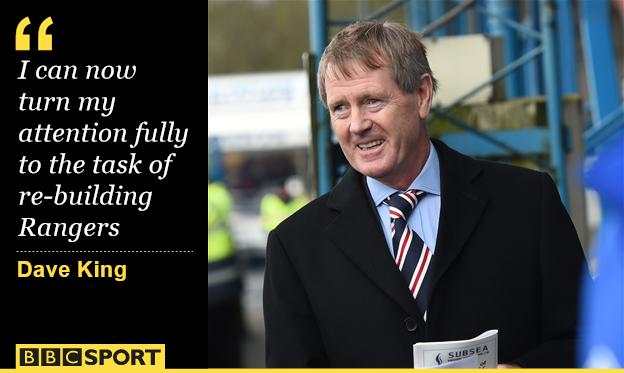 An SFA statement said the board had "considered the fit and proper status of Mr Dave King as a director of the club" and, after receiving specialist legal advice in Scotland and South Africa, could confirm it was satisfied he passed the test.

King said he was "delighted" at the announcement and that he would now "turn [his] attention fully to the task of re-building Rangers".

He also thanked the SFA "for their diligence in this matter".

He said in a statement: "It was essential that I dealt fully with all of the Scottish FA's questions and provided them with everything they required, no matter how personal, in order to prove that there were no barriers to me joining the Board of Rangers International Football Club plc.

"I always maintained I would meet the fit and proper requirements of the Scottish FA once they had examined all the evidence and that is what happened.

"I said before that I must be the most scrutinised candidate in Scottish football history, but I was happy to accept this given the importance to the club of having a board fully comprised of individuals who are all approved by the Scottish FA.

"We finally have that, and my colleagues on the board and I look forward to serving the club in the years to come."