Aberdeen stalwart Russell Anderson admitted to having conflicting emotions as he spoke of his decision to retire.

The 36-year-old former Scotland defender announced he was ending his playing career last week after an injury-hit season.

He told BBC Radio Scotland: "It was a difficult decision but, considering the season that I've had, it is something I've been thinking about for a while.

"It's mixed emotions, but I'm comfortable with the decision."

Anderson, who came through the youth ranks at Pittodrie, is in his second spell with his hometown club but has not played since August last year.

"It has been very frustrating sitting on the sidelines watching the team," he continued. 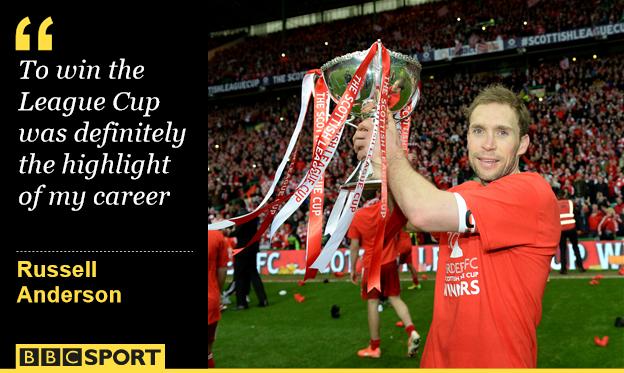 "They have had a fantastic season so far. I think we've done a lot better than a lot of people would have been expecting us to do in the league, so from that point of view it has been difficult.

"It comes to us all. I've just got to move on to a new chapter in my career and my life now."

Anderson will remain at Pittodrie working as a full-time business development executive, a new role at the club.

He made 413 appearances for the Dons, 85 of them since his return in 2012 after leaving Derby County.

He won 11 caps, but had an injury troubled career and made only one appearance for Sunderland after a £1m move from Aberdeen in 2007. He had spells on loan to Plymouth Argyle and Burnley before switching to Derby.

Anderson said his wife has been the biggest influence on his career.

"There have been an awful lot of highs but probably just as many lows that she's had to share with me over the years," he explained.

"My family has been very important throughout the whole time."

Asked to pick out a career highlight, he said: "Without doubt, it would have to be last March when we won the League Cup.

"Coming back from Derby injured, I wasn't sure if I'd play again, so to get the additional bonus of getting to play for the team again for two-and-a-half to three years was great in itself.

"But to be able to lead the team out at Parkhead and win the League Cup was definitely the highlight of my career."