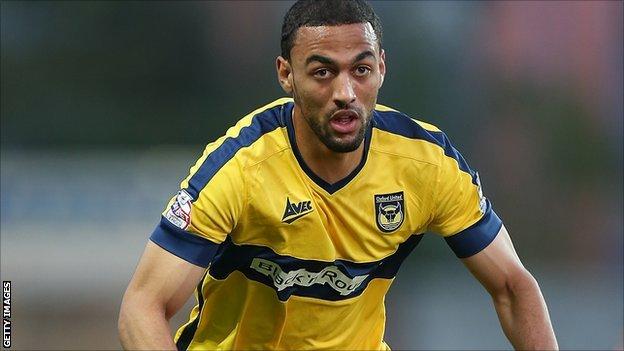 Oxford United have signed West Brom forward Kemar Roofe on a three-year-deal for an undisclosed fee.

Roofe, 22, joined the U's on loan in February and went on to score six goals in his final seven games.

"Not only have I enjoyed my football at Oxford and been made to feel really welcome but I have also seen how ambitious the club are," Roofe said.

Meanwhile, Oxford United captain Jake Wright is staying at the club after signing a new two-year-deal.

Midfielder Danny Rose has got his name onto the retained list earning a one-year extension, but veteran Andy Whing's playing days at Oxford are over although the defender has been offered a new coaching role at the club.

Development squad players Sam Long, Aidan Hawtin and Sam Humphreys have all been offered longer contracts at the Kassam Stadium.

In the goalkeeping department, United have activated a two-year extension to New Zealand Under-21 keeper Max Crocombe's existing deal, and they are also talking to experienced Jamie Ashdown about keeping him at the club. Ryan Clarke - United's number one since 2009 - still has a year left on his contract.

United have informed Jon Meades, Will Hoskins, John Campbell, Josh Shama, Matt Bevans, and Jeremy Balmy they have played their last games for the U's and will not be offered new deals.

U's CEO Mark Ashton hailed the signing of Roofe and admitted he was manager Michael Appleton's number one target.

It's a key signing for us," Ashton told BBC Radio Oxford.

"We are all delighted with how Kemar progressed, he improved game by game and he scored a hatful of goals,

"Michael made it clear Kemar was his number one target and if we could get Kemar in to do it and do it quickly. We moved as swiftly as we could and I'm delighted to say he is an Oxford United player.

"Kemar made it very clear he wanted to play for us and Michael Appleton. We are trying to move the club forward in all areas but we are very aware it all hinges on what happens on the pitch and Kemar has a big part to play on that.

"We want to bring in a number of players and I'd like to think there would be another one announced in the next 24-48 hours and then we move again. We'd like to do as much of our business as early as we can."