The 10th-placed Staggies, three points clear of Motherwell, host Hamilton on Saturday and round off their campaign away to Kilmarnock a week later.

"I can't sense any nerves in the boys," said the on-loan Dundee United player.

"The way training is, the way the guys are, we've got a good bunch. We need to look at the games and be confident."

When County lost to Aberdeen on 7 February they had 12 points from 24 games.

There followed a run of eight wins and a draw to give the club's league campaign a tremendous boost. 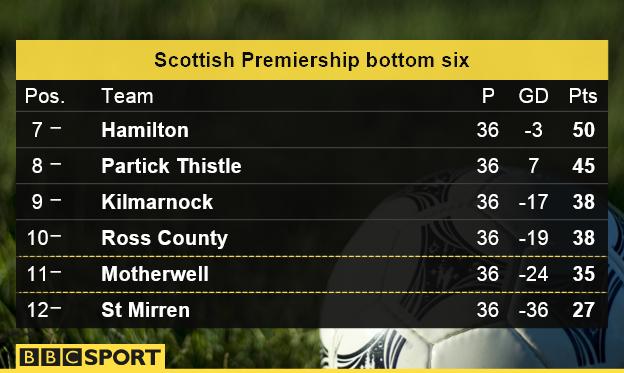 However, as the season reaches its climax, they have lost two and drawn one of their last three matches.

They and Kilmarnock are level on 38 points, but a poorer goal difference means it is the Dingwall side who sit closest to Motherwell, currently in the relegation play-off spot.

That, though, has not damaged the feel-good factor under manager Jim McIntyre and his assistant Billy Dodds, maintains Gardyne.

The 29-year-old, whose Tannadice contract expires at the end of the season, said: "The management and staff come in on a Monday morning and it's not all doom and gloom.

"It's all about the next game.

"We know we can win here and teams don't really like coming up here, which should work in our favour.

"Hamilton at home, it will be two teams going to win the game. It could be quite an open match and hopefully we can get the win.

"We have two massive games and the good thing is that we've got it in our own hands. We are three points ahead with two games to go. We're looking to win the two games."

Dundee-born Gardyne, who spent four seasons with County before signing a three-year contract with United, could return to Dingwall on a long-term deal next season.

"I'm sure the gaffer will sit down and speak to me and we'll take it from there," he said.

"Hopefully we can keep Ross County in the league and keep the team together."