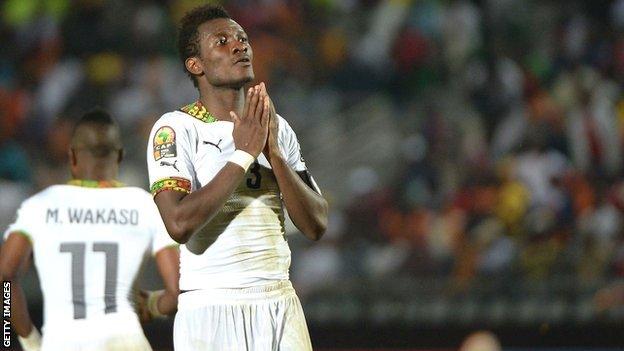 Former Ghana and Benin coach Cecil Jones Attuquayefio has died at the age of 70, following a long battle with cancer.

The Ghana FA is immensely hurt by the loss of such a talented footballer, coach and administrator

Attuquayefio represented Ghana as a player and won the Nations Cup with the Black Stars in 1965 but it was during a distinguished coaching career that he made his mark.

He led Ghanaian side Hearts of Oak to the 2000 African Champions League title, as well as qualifying Benin to their first Africa Cup of Nations in 2004.

Attuquayefio was assistant coach as Ghana won Africa's first Olympic medal in 1992, when the Black Meteors took bronze, while he also coached the Black Starlets to third place in the 1999 Fifa Under-17 World Cup.

On Twitter, Gyan wrote 'a legend goes home' and went on to praise the coach's role in the early stages of his career.

"Sad day.... my great coach and inspirer... he handed me my first chance... Rest in Peace Sir Cecil Jones Attuquayefio," tweeted Gyan, who played under the coach at Liberty Professionals in 2003.

The Ghana FA (GFA) also paid tribute to a man who served as a vice-president of the organisation in the 1980s and 1990s.

"Attuquayefio's contribution to football in our country touched the lives of many people not only in Ghana but also in many countries in Africa," read a statement signed by GFA president Kwesi Nyantakyi.

"The GFA is immensely hurt by the loss of such a talented footballer, coach and administrator who shaped the lives and careers of many Ghanaian footballers."

Ghana defender Jonathan Mensah also made his tribute, writing that Ghana has lost one of its leading thinkers about the game.

"One of the Brains in Ghana Football left us. Rest In Peace Sir Cecil Jones Attuquayefio. Yes Sir. #legend"

Attuquayefio guided Ghanaian side Accra Hearts of Oak to their first continental title in 2000, beating Tunisia's Esperance in the final, before then beating Egyptians Zamalek to the CAF Super Cup.

He returned to guide the same club to the first ever CAF Confederation Cup title in 2005, beating Asante Kotoko in what was the first continental final between two clubs from the same country.

His time with Ghana's Black Stars was less successful after they failed to qualify for the 2002 World Cup under his control.

His spell will be largely remembered for dropping the Black Stars' big-name overseas-based players for a crunch qualifier against Nigeria in protest at what he called their lack of commitment to represent Ghana.

The Black Stars came away with a draw from that game.

He enjoyed more success in Benin, leading the Squirrels to their first Nations Cup in 2004.

As a player, Attuquayefio won the Nations Cup itself, scoring twice in the group stages before starting the 1965 final as Ghana beat Tunisia 3-2.