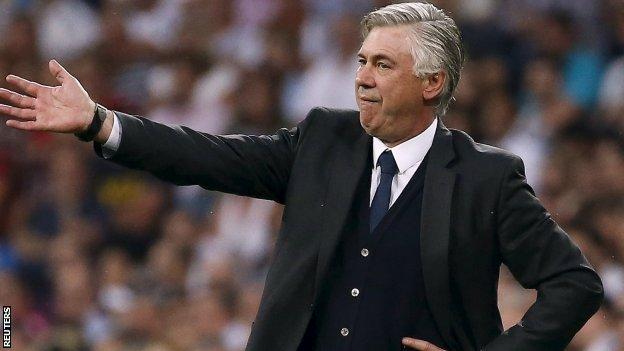 Real Madrid manager Carlo Ancelotti has been given a two-game touchline ban for dissent towards a referee.

The Italian was reported by referee Carlos Clos Gomez for sarcastically applauding the officials at the end of Saturday's 2-2 draw with Valencia.

The result, which left Real four points behind Barcelona in La Liga, all but ended their title hopes.

It means Ancelotti, 55, is banned from sitting on the bench for his side's final two games of the season.

According to the match official's notes, the former Chelsea manager continued the exaggerated applause in the tunnel, and did the same to one of the assistant referees.

Spanish football rules say that coaches who show "contempt or disregard" can be banned from the touchline for up to a month.