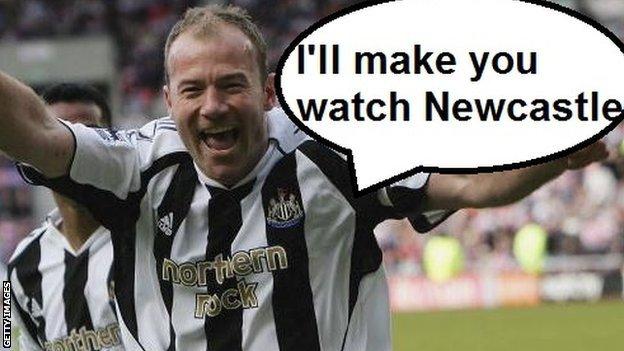 Former Newcastle and England captain Alan Shearer joined Twitter with a cheeky message for anyone thinking of winding him up.

Shearer, 44, retired as a player in 2006 and briefly managed Newcastle before moving into the media, becoming a regular Match of the Day pundit.

His former club are 17th in the Premier League and Shearer used their plight to warn anyone considering abusing him.

He posted: "Any abuse and I'll come round and give you Newcastle tickets."

You can listen to a chat between former Blackburn players Shearer and Chris Sutton and ex-manager Kenny Dalglish as they reflect on the club's Premier League title win 20 years ago by visiting the BBC Radio 5 live website.