After a rare trophy-free season in 2013-14, Barcelona took their first step towards the treble when Sunday's 1-0 victory at Atletico Madrid secured Spain's La Liga title.

Luis Enrique's side, who meet Juventus in the Champions League final and Athletic Bilbao in the Copa del Rey showpiece, are two matches away from becoming only the second Spanish side to win all three trophies in the same season.

How have they done it? Here we take a look at the factors behind Barca's resurgence from no silverware to potentially three trophies.

By his own unique standards, 2013-14 was a disappointing campaign for Lionel Messi, who still posted impressive numbers but exerted a significantly lesser influence on the action - especially in the most important games - than he had in the past.

But the Argentine has roared back to his best now, with his performances since the turn of the year, in particular, rivalling anything he has ever produced over the course of his spectacular career.

Notably, the Argentina captain's new position on the right wing is allowing him to add an astonishing number of assists to his equally outrageous output of goals.

He is looking fit, motivated and prepared to work within a team structure. All those things were lacking this time last year, but he is now once again capable of imposing his will upon a game at any given moment and more or less making this year's Ballon d'Or vote redundant.

Messi's rejuvenation is partly explained by the liberating effect provided by the presence of Luis Suarez, whose contribution during his first season at the Nou Camp must be measured by far more than the 24 goals he has scored.

More important than the statistics is the fact Suarez's relentless work-rate and excellent, intelligent movement provide a constant challenge to opposing defenders, who regularly find themselves stretched and dragged out of position by the Uruguayan's perceptive running.

In turn, this creates space for Messi and Neymar to cut inside from their starting positions on the flanks and wreak merry havoc in and around the penalty area.

Suarez, who arrived in a £75m deal from Liverpool in July 2014, has provided Barca's attack with a focal point that had been missing for the past few years.

The end result is that he, Neymar and Messi have fulfilled their awesome collective potential by combining for a ridiculous total of 115 goals this season, including 79 in La Liga. 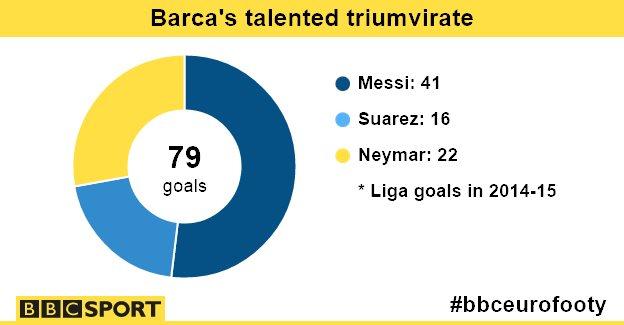 During the first few months of the season, even though Barca were winning games, they were rarely producing convincing and coherent performances, relying more upon the individual quality of their players than an effective team structure to gain results.

The clearest example, perhaps, was the home derby against Espanyol in December, when Barca were horribly disjointed for much of the first half and trailed 1-0 until Messi took over to spark a 5-1 victory which really did not reflect the game's overall pattern.

Although they mostly got away with it, Barca were dropping sufficient points against modest opposition - Malaga, Celta Vigo, Getafe, Real Sociedad - to seriously undermine their title challenge.

Since January, however, they have been transformed, with manager Luis Enrique settling upon an established strongest XI and consistently implementing a new style of play which is based upon the strengths of the front three rather than the midfield-heavy passing game employed for the previous few years.

The difference is subtle but distinct, and, now it is understood throughout the team, it has allowed the development of an effective unit which truly plays as a team rather than as a group of talented but disconnected individuals.

Then-manager Tata Martino would just shrug his shoulders and say "We've got small players", apparently believing that frailty was simply something they would have to live with.

New boss Enrique has rubbished that defeatist attitude, however, by transforming his team into set-piece experts at both ends of the field.

Bayern Munich's opener in last week's Champions League semi-final second leg was the first goal Barca had conceded directly from a corner or free-kick since October, while Gerard Pique, who has netted seven times, has enjoyed the club's best goalscoring campaign for a defender in nearly two decades.

Even Messi scored with a diving header from a corner to set up an away win at Eibar.

A mark of Barca's vulnerability during their trophyless campaign last season was that they faced Atletico Madrid on no fewer than six occasions in all competitions and could not even beat them once, scoring only three goals - a sequence including a final-day draw at the Nou Camp which secured the title for Atletico.

In January, however, they well and truly buried that hoodoo by convincingly defeating Diego Simeone's team three times in the space of two and a half weeks - once in La Liga and twice in the Copa del Rey.

Those successes came at exactly the time Enrique's men were starting to find their rhythm, and provided unshakeable confidence that this new-look Barca could prevail over anyone, anywhere - not just opposition whose style of play suited their own.

It was fitting, then, that the title was clinched with yet another victory over Atletico on Sunday, neatly encapsulating just how far Barca have come in the past 12 months.

Last summer Barca acknowledged their deficiencies in several areas by making a raft of signings, and almost without exception they have proven highly successful.

Claudio Bravo has been solid and assured in goal, making only a handful of major mistakes, with Marc-Andre ter Stegen's impressive Champions League displays providing strong competition to prevent Bravo lapsing into complacency.

Jeremy Mathieu has settled quickly in defence, contributing well when regular starters Pique and Javier Mascherano have been rested or injured - his goalscoring display in the Clasico victory over Real Madrid being the prime example.

In midfield, the dynamic Ivan Rakitic has been the perfect introduction for Barca's more direct and forceful new style, while Suarez's success in attack has already been described.

Naturally, much of the attention focuses on Barca's outstanding goalscoring exploits, but they have been just as proficient at the other end of the field.

Individual excellence has been a major factor behind their defensive stinginess, with Bravo's quiet competence particularly well supported by the outstanding Pique, who has recovered from a self-professed slump in form to re-establish himself as one of the world's finest central defenders.

Right-back Dani Alves - perhaps motivated by the lure of a potential new contract - is another who has come back to his very best, while left-back Jordi Alba's non-stop energy and Mascherano's unwavering commitment complete a fine back four.

More important than personal performances, though, Enrique has the whole team functioning as an effective unit, with their defending starting up front through Messi, Suarez and Neymar's willingness to close down opposition, making it very difficult to develop attacks against Barca in the first place.

Over the past few months, Real Madrid have been forced by a succession of injuries at various times to cope without Luka Modric, James Rodriguez, Gareth Bale, Karim Benzema, Sergio Ramos and Pepe.

Barca have been much more fortunate, with Enrique heading into the final stages of the season with his entire squad available - even Thomas Vermaelen, who has finally recovered from the thigh injury with which he arrived from Arsenal.

Enrique would argue, no doubt, that this lack of injuries is not lucky at all, but the logical outcome of his carefully planned rotation strategy which has kept everyone fit and firing throughout the campaign.

Whether by design or fortune, having everybody fit nearly all season has undoubtedly made Barca's task in challenging on all fronts much more manageable.

In three of the past five La Liga seasons, Barca's likely final points total of 96 would not have been enough to win La Liga, but on this occasion they have been helped by the lack of a challenge from the capital.

Although they are still a very good team, Atletico Madrid have been unable to retain the ruthless consistency which made them champions last season.

And Real Madrid's season peaked in December, when they were crowned Club World Cup champions at the end of a 22-game winning run.

Since then, Carlo Ancelotti's men have gradually but steadily deteriorated, making Barca's task in winning the title more straightforward than they might reasonably have anticipated.

Normally, you would expect a new manager who has led his team to the title in his first season in charge to feature much higher than number 10 in a list of this nature.

That is not the case with Enrique, however, because there is significant support for the theory (including from within the dressing-room) that Barca's successes have come this season despite their manager, not because of him.

Specifically, there are ongoing rumours that the team's real leader, and the instigator of the tactical changes which turned their season around in January, is Messi, not Enrique, and that the duo share a decidedly frosty personal relationship.

That uncharitable viewpoint is an exaggeration and over-simplification - no manager could enjoy sustained success over many months without exerting a strong degree of control and authority in the dressing-room.

And although there might be a lack of warmth in the relationship between Enrique and many of his players, that goes to prove the old adage that managers do not need to be popular to be successful.