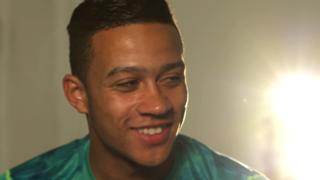 Depay dream to be 'best in the world'

Manchester United's new £31m player Memphis Depay tells Football Focus he has "a dream to be the best player in the world".

Depay, who has scored 21 goals this season, will sign a four-year contract. He has 15 international caps for the Dutch national team, where he played under then-manager Louis van Gaal.

Watch more from Memphis Depay on Football Focus, Saturday 16 May, 12:10 BST on BBC One and the BBC Sport website.