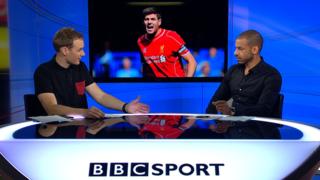 And Belgium and Tottenham winger Nacer Chadli tells us about his love of London... and public transport!