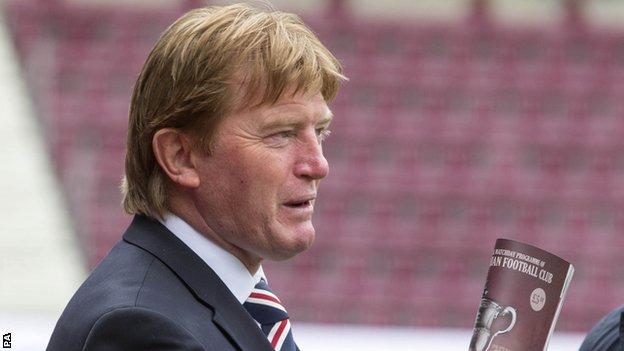 Rangers manager Stuart McCall says he will have to formally apply for his own job, even if he secures promotion to the Scottish Premiership.

And he insists that he has no problem with the Glasgow club speaking to other candidates.

McCall agreed a contract until the end of the season when Kenny McDowall stood down in March.

The Ibrox outfit were taken over by a consortium led by shareholder Dave King shortly before that.

"Would it bother me if the club were speaking to other people? Not at all," said McCall.

"When I first came into the job I knew what was being asked of me. It gave me the opportunity to come in.

"But I was always aware of what the gig was.

"It's rightly so that the club will be speaking to other people. Even just for the experience of it and to hear from them on which route they would take.

"You have to bear in mind that our board are new to it and I imagine they will be taking advice.

"Dick Advocaat was up the other day and came to speak to me in my office. I don't know if he was measuring up the curtains and the carpets but it was nice to see him. We had a good chat.

"I would imagine I would have to go for a formal interview. I don't think there is any doubt about that but I'm fully comfortable with it."

Rangers, who finished third in the Championship, lead Queen of the South after the first leg of their Premiership play-off.

Should they win that, they will need to win further play-offs against Hibernian then the side who finish second bottom of the Premiership to secure promotion.

Rangers were linked with a move for the MK Dons boss Karl Robinson but McCall says he does not know who has been approached.