Messi's 41st league goal of the season ensured that Real Madrid will finish second - despite Cristiano Ronaldo's hat-trick against Espanyol.

With one game left Barca hold a four-point lead ahead of rivals Real.

Luis Enrique's treble-chasing side play Athletic Bilbao in the Spanish cup final on 30 May, before facing Juventus in June's Champions League final.

Defending champions Atletico had gone close to opening the lead before Messi exchanged passes with Pedro and fired low into the corner.

The Barcelona players and staff celebrated on Atletico's Vicente Calderon pitch after reclaiming the crown which they lost to Diego Simeone's side on the final day of last season exactly a year ago.

And they could yet repeat the feat of 2008-09, when they won a historic treble under Pep Guardiola.

The Catalan club have scored 108 goals so far in the league, with a fixture at home to relegation-threatened Deportivo La Coruna still to come.

Their front three of Messi, Neymar and Luis Suarez - who missed the trip to Atletico through injury - have been prolific, netting 115 goals between them in all competitions.

Barca had a trophyless campaign last time round under Argentine coach Tata Martino, but Enrique has turned the club's fortunes around in his first season in charge.

However, the former Barca and Real midfielder - who played at the Nou Camp between 1996 and 2004 - had to overcome a difficult period in the New Year before eventually guiding Barca to the title.

The 45-year-old coach faced heavy criticism for leaving Messi and Neymar on the bench as Barca, then adrift of Real Madrid in the title race, lost at David Moyes' Real Sociedad.

There were suggestions that the move led to a row between him and talisman Messi, who was forced to deny reports he wanted to leave Barca.

But since that turbulent week in early January, Enrique has steered Barca to 29 wins and just two defeats in 32 matches across all competitions as they now target the treble.

Carlo Ancelotti's Real side were hoping Barca would slip up at Atletico in order to take the title race to the final day.

But although Ronaldo took his tally to 45 goals in the league in a 4-1 victory over Espanyol, Messi's moment of magic was enough for Barca to win their fifth championship in seven years. 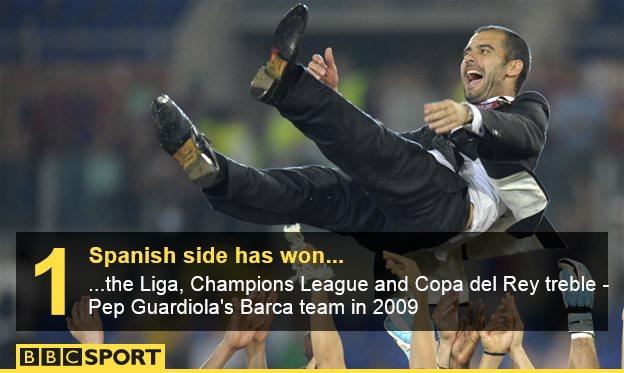