Manchester United goalkeeper David De Gea will leave Old Trafford at the end of the season after the 24-year-old agreed personal terms with Real Madrid, with only a transfer fee to be negotiated. (Marca)

But other reports suggest the Spain international has not agreed terms and has been offered a new deal by Manchester United, with his current one set to expire next summer. (Sky Sports)

Manchester United manager Louis van Gaal is working with his scouting staff to find a replacement for De Gea. (the Sun- subscription required)

Manchester City midfielder James Milner, 29, wants to move to Liverpool at the end of the season and will turn down the chance to join Arsenal. (Daily Mirror)

Real Madrid winger Gareth Bale, 25, should return to the Premier League where he will be appreciated and allowed to flourish again, according to former Liverpool and England defender Jamie Carragher. (Daily Mail)

Napoli manager Rafael Benitez, 55, is top of West Ham's list to succeed Sam Allardyce, who is out of contract at the end of the season, and expected to leave the Hammers. (Daily Mail)

Chelsea goalkeeper Petr Cech could be on his way to Paris St-Germain despite Arsenal's interest in the 32-year-old. (Daily Mirror)

Meanwhile, manager Jose Mourinho has revealed Chelsea are buying extra medals to make sure every member involved in the first-team squad during the season will be rewarded for their title success. (London Evening Standard)

Steve Bruce will remain manager of Hull City even if the club is relegated from the Premier League, according to owner Assem Allam. (Daily Mail)

Liverpool could move for midfielder Andrea Pirlo this summer if the 35-year-old Italian leaves Juventus, with the potential arrival of Liverpool's former player Xabi Alonso, 33, at the Italian club. (Daily Express)

Tottenham have not given up hope of signing Southampton midfielder Morgan Schneiderlin, 25, this summer, with Arsenal cooling their interest in the France midfielder as they prepare a move for Borussia Dortmund's Ilkay Gundogan, 24. (Daily Telegraph)

Sunderland manager Dick Advocaat, 67, may be tempted to extend his current short-team deal at the Stadium of Light. (the Times - subscription required)

Despite Arsenal still being in contention to finish second in the Premier League, the club's former midfielder Paul Merson says they need a new spine to their team to challenge Chelsea for the title next season. (Sky Sports)

Former Liverpool midfielder Dietmar Hamann says Steven Gerrard, 34, is likely to be the last top player to spend all his career at one club. (Guardian)

Queens Park Rangers midfielder Joey Barton has had a row with the club's former striker Rodney Marsh on Twitter, calling the 70-year-old "a bitter man".

As Steven Gerrard prepares for his final game at Anfield, the Liverpool Echo have taken a look back to the early years of his football life with footage of him playing for Whiston Juniors aged just 12.

And before Gerrard's last Anfield appearance, former team-mate John Arne Riise has written an emotional blog about his former captain. "He is the greatest Liverpool has ever had," writes Riise. "I'm honoured that I can say I played seven years with the legend himself. I won the Champions League with him, even though I think he won it for us."

Meanwhile, Gerrard uploaded an image of a large bottle of bubbly onto Instagram. The bottle is inscribed with a loving message from family members, citing an "unbelievable 17 years". 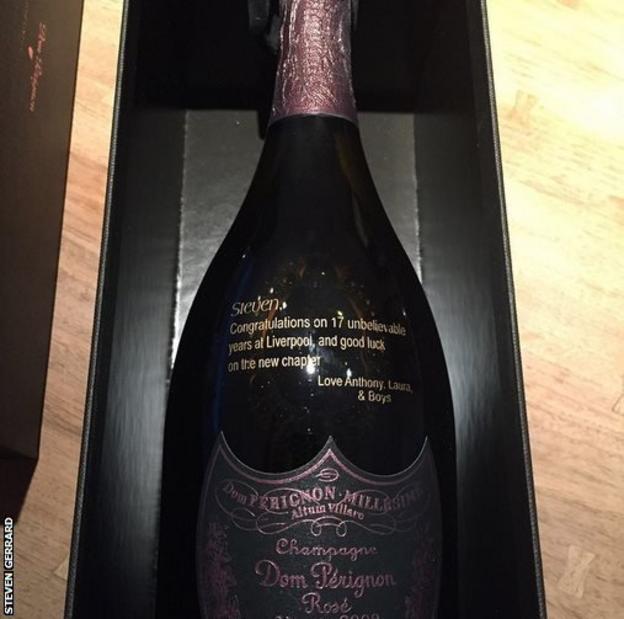 Manchester United's latest signing Memphis Depay is warming up nicely for life at Old Trafford as footage from the 21-year-old's most recent training session with PSV Eindhoven showed him scoring four times, including one sublime chip. (Daily Star)