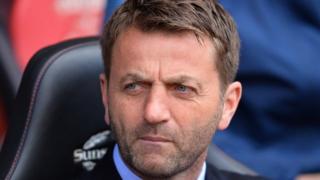 Aston Villa boss Tim Sherwood says the first-half performance of his side during their 6-1 defeat at Southampton was the worst since he joined the club.

Villa were 5-1 down at half time, having conceded three goals in three minutes as Saints forward Sadio Mane scored the fastest hat-trick in Premier League history.

Defeat means Sherwood's side may well need to pick up points in their final game of the season against Burnley to ensure they retain their Premier League status.