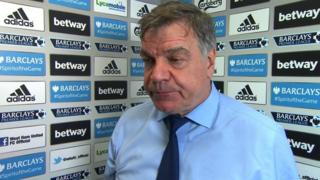 West Ham boss Sam Allardyce is unhappy that referee Kevin Friend did not award his side a penalty during their 2-1 defeat at home to Everton.

The Hammers took the lead through Stewart Downing, before Leon Osman made it 1-1 and Romelu Lukaku scored a 93rd-minute winner for the Toffees.

Allardyce has won just two of his last 15 Premier League games, and this defeat means West Ham slip to 11th in the Premier League with one game remaining.