Swansea City boss Garry Monk says he is disappointed his side will not be playing in next season's Europa League.

The Swans 4-2 home defeat to Manchester City on Sunday ended their hopes of qualifying for Europe.

The result means Swansea have sealed eighth place in the Premier League with one game remaining.

"I'm obviously disappointed not to get into Europe," said Monk. "I think it would have been just rewards for the season that we've had."

Monk, 36, is in his first full season in charge at the Liberty Stadium and has led the club past its highest ever Premier League position and points tally.

The highest the club has finished in the top flight is sixth in the old First Division in 1981-82.

English clubs have three places in the Europa League - for the FA Cup winners, Capital One Cup winners and fifth-placed Premier League side.

Chelsea's Capital One Cup win means sixth place will also qualify and if Arsenal win the FA Cup, that will extend qualification to seventh place in the table.

In addition, England has been granted an extra Europa League place as one of the top three countries in Uefa's Respect Fair Play league and that spot is set to go to West Ham, Everton or Burnley.

Monk says he hopes he can build on his side's performance next season.

"We've broken records… created history for the club," he said. 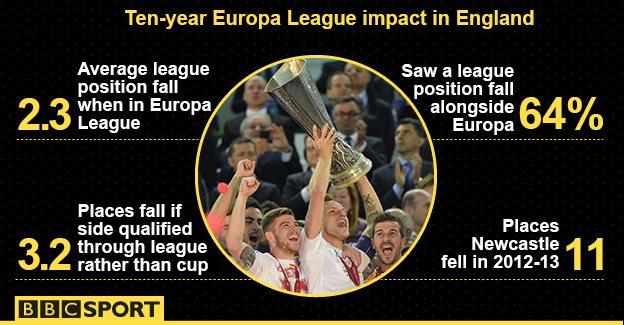 "The development of it all… I'm very proud of the players, my staff, everyone was excellent. Hopefully we can get even better."

Manchester City manager Manuel Pellegrini has no doubts that Swansea can keep progressing under Monk.

"Firstly, I congratulate Swansea on a very good season," he said.

"I like the way they play. I'm absolutely sure that they will continue in the same way and continue improving."

Swansea complete their Premier League campaign away to Crystal Palace on Sunday 24 May.